Symptoms and Treatment of Coccidiosis in Dogs

"Coccidiosis in dogs is caused by dog coccidia parasites that are ingested after eating fecal matter. The condition is commonly seen in puppies age 6 to 8 weeks. The most prominent symptom is blood and mucous streaked diarrhea that is sometimes accompanied by vomiting.

Diagnosis is via a fecal test. Even if results are negative, if a veterinarian suspects coccidiosis, treatment may still be recommended. Most dogs will recover without any treatment or after taking one of several low cost medications. Reinfection between puppies in the same litter is a problem in kennels or pet stores. Most dogs with the infection are asymptomatic carriers (don't show symptoms).

The most common form of coccidia does not cause disease in people, however, in rare cases less common forms can infect humans (Cryptosporidium). Because it is rare, dogs are not removed or isolated from people in the household." 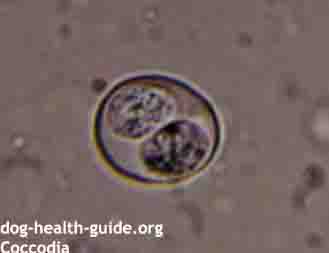 Microscopic View of Dog Coccodia Parasite,
A One Cell Organism That Causes Watery Diarrhea in Dogs

There are four types of coccidia parasites that affect dogs (lsospora canis, ohioensis, eorivolta, and I. burrowsi), causing the infection coccidiosis. Coccidiosis is typically found in puppies under 1 year of age and is usually not serious. Up to 72% of dogs have some sign of coccidian protozoa in their feces, and be considered subclinical. Symptoms of infection can occur in immune compromised dogs such as puppies that no longer have the protection of the mothers immunity, or dogs under stress.

After contracting the disease, the protozoa enters the dog's intestine and begins to rapidly multiply. The protozoa then form an egg which is released from the dog in the feces. This cycle continues for up to 14 days before it stops.

Stress is a common cause of this disease which is why it is commonly seen in puppies that are brought into a new home. If the puppy gets the disease in under 13 days, it may have contracted prior, such as in a kennel or puppy farm. If longer than 13 days, it is more likely it was caught in the home.

Chronic coccidiosis infections can cause damage to the intestinal lining and affect the absorption of nutrients from food, leading to malnourishment.

In addition to cough, dogs may have soft or watery diarrhea that contains some blood and/or mucous, loss of appetite, weight loss, weakness in puppies and dehydration due to diarrhea. Since these symptoms are consistent with other diseases, it is difficult to diagnose. 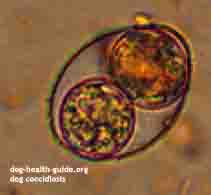 Coccidia are found through a fecal exam, although presence of the eggs (oocyst) do not mandate treatment. If symptoms are present and treatment is needed, your veterinarian will need to differentiate the condition from diseases with similar symptoms such as bacterial infections, other parasites, viral infections, or IBD.

Your Veterinarian will address any problems that are a result of the dog coccodiosis such as fluid therapy to address dehydration caused by the diarrhea.

There are two prescription drugs, sulfadimethoxine (Albon) and trimethoprim-sulfadiazine (Tribrissen) that are effective in both the treatment and prevention of coccidiosis. These drugs do not kill the organisms, but stop their ability to reproduce, allowing the dog's immune system to be able to remove the remaining organisms.

Most dogs are treated as an outpatient. Retesting 2 weeks after treating will confirm that the  coccidiosis has been cured.

Because the coccidia parasite can survive in the environment, kennels and other areas where dogs congregate need to be sterilized. The parasite can be killed with chlorine bleach (ratio 1 cup of bleach per gallon of water). An alternative product is Benzarid.

Have a Diarrhea Related Question For Our Editors or A Story to Tell About This Topic?

Do you have a dog diarrhea or other digestive system related question for our Editors or a helpful story to share? Please include information such as age, sex, breed, medical history, diet changes in behavior and medications.