What You Need to Know:

Canine rabies is very unusual in the United States since vaccination protects against the disease. Worldwide over 50,000 humans die each year from rabies, mostly in developing countries from dog bites.(1) There is no cure for this virus. Your dog is unlikely to get rabies if he is bitten by another dog or even a wild animal. Of course, your dog should be vaccinated against rabies, which will protect him even if he is bitten by a rabid animal.

If you are bitten by a dog that you believe has rabies, you should disinfect the area on your skin with soap and water for 15 minutes (flush the wound) and then see a doctor immediately. Immediate treatment with a vaccine for humans can be a life saving step.

Dog bite rabies (Rhabdoviridae virus) needs to be treated immediately if a human or dog is bitten. After a bite from ANY animal, that animal should be quarantined for 10 days to determine if they show any symptoms associated with rabies, regardless of the dog's vaccination status. If the dog does have rabies, then the animal should be euthanized (killed) and then tested for rabies. Animals from the wild should be tested immediately.

Since the rabies vaccine is not 100% effective, if a dog is bitten by a potentially rabid animal, the dog should be observed for 45 days at home. If a dog is not current with the rabies vaccine, then the pet should be subjected to a 6-month quarantine or euthanasia. when does are being observed they should not be vaccinated since it is difficult to distinguish between effects from the vaccine vs. symptoms of the disease itself.

After infection it can take anywhere from 10 days to 6 months for symptoms to appear. Dogs that might have been infected are quarantined to ensure that the virus does not spread. Only mammals can contract rabies. Dogs that bite a human need to be quarantined and checked for symptoms. Rabies are usually carried by foxes, bats, skunk, raccoon and coyotes 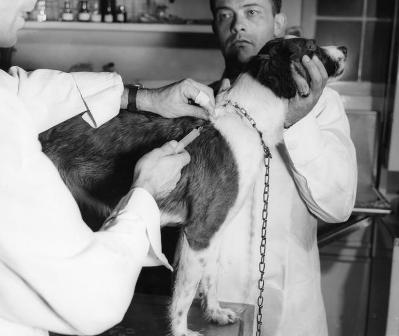 Dog Bite Rabies in Patient Helps Protect From Rabies and Limit the Spread of the Disease
Source: Centers for Disease Control

A dog with rabies is rare in the United States. It is more common in some other parts of the world, such as Asia. All warm-blooded animals can get rabies including humans. All dogs should be vaccinated for rabies at age 12 – 16 weeks and again at age one year. After that, they should be vaccinated on a regular basis. There is no cure for rabies, so vaccination is critical.

If you are bitten by a dog or suspicious animal seek immediate treatment since the rabies vaccine is not 100% effective, causing any bite victim, animal or human to seek medical care for a bite wound.

When an infected animal bites a dog, the rabies virus moves along the nerves toward the brain. It is a slow-moving virus and there is an incubation period of 3 – 8 weeks before symptoms are shown.

The most noticeable symptoms are changes in behavior and unexplained paralysis (inability to move a part of the body). Animals that seem different than usual such as a nocturnal animal appearing during the day or an animal that loses any fear of people could be infected.

There are three stages of rabies symptoms.

There is currently no test for rabies in a dog or people prior to the appearance of symptoms.(1) Researchers are working on a blood test, but none exists at this time.

Currently the only way to make an accurate diagnosis of rabies in a dog is to examine the brain. This means the dog must be dead.

A tentative diagnosis can be made based on the symptoms described above. A dog with rabies symptoms should be treated as if he may have the disease and be isolated from other animals.

If the dog develops symptoms of rabies during this time, he should be euthanized.

Unfortunately there is no dog rabies treatment. The disease is fatal.

That’s why it is so important to have your dog vaccinated. There are both a one-year vaccine and a three-year vaccine available. Talk to your veterinarian about which vaccine is best for your dog.

If a person has had their rabies shots, the dog bite or animal bite wound is cleaned with soap and water. They receive 2 vaccine injections.

Humans that have not been vaccinated first have the bite cleaned (flush with water for 15 minutes with soap and water, detergent, and substances that would kill the rabies virus such as povidone iodine). The bite area is then treated with rabies immunoglobulin.

Rabies can be fatal in humans, so if there is any concern over vaccination status, treatment is provided as described above.

What is the Dog Rabies Vaccination Schedule?

How Long Should a Dog With No Medical History Be Quarantined if Suspected of Rabies Exposure?

A dog that has a skin puncture wound, and no medical history such as a stray, should be quarantined and observed for 10 days. A local public health authority should also be alerted and if any human was bitten, they should visit a Doctor.

What are the Stages of Rabies in Dogs?

There are three stages of rabies symptoms.

How Does the Rabies Pathogen Spread in the Body?

Rabies is passed via saliva into a bite wound. The virus is injected into the muscle in a concentrated form, which is necessary for it to spread. It is also why infected people start to have an adverse reaction to water to avoid any dilution when the virus starts to spread (called shedding). It is generally understood that virus replication happens in the muscle cells and then moves into the fluid between each cell. The virus coats itself in a protein that passes nutrients and information. These cells then travel along the cell micro-tubular structure. The virus travels up the peripheral nervous system to the central nervous system, although this process is not completely understood. The virus then travels up the nervous system to the hippocampal area in the brain. This impacts the cranial nerves and the infection of the salivary gland epithelial cells enabling the infected dog to spread the disease via saliva. An infected person begins to experience difficulty with swallowing and choking, causing anxiety when they want to swallow.

What is the Incubation Period for Rabies in People?

The incubation period for rabies on people is typically 2–3 months but may vary from 1 week to 1 year, dependent upon factors such as the location of virus entry and viral load. Initial symptoms of rabies include a fever with pain and unusual or unexplained tingling, pricking, or burning sensation (paraesthesia) at the wound site. As the virus spreads to the central nervous system, a progressive and fatal inflammation of the brain and spinal cord develops.