6 Health Reasons to Spay or Neuter Your Dog 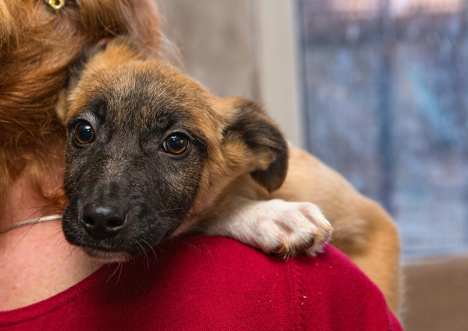 Bringing a new dog into the home is a big decision. Whether you’ve adopted a puppy or an older dog, the choice to spay or neuter is one of the first ones you’ll need to make, and it’s crucial for his or her long-term health. It’s not just about preventing unwanted puppies, either.

Those are some very persuasive statistics, but why do altered pets live longer? Part of their longevity can be traced back to a reduced urge to roam. Neutered and spayed dogs tend to stay closer to home, which means less risk of injury, less exposure to infection and disease, and less fighting with other animals.

Sadly, un-altered dogs make up a whopping 85 percent of dogs who are hit by cars. The bottom line is neutering or spaying your dog is a crucial step for keeping him or her safe and healthy at home.

Female dogs can go into heat up to twice each year starting at about six months of age. During the heat cycle, an unspayed female dog may bleed or have discharge from the vagina.

She will often urinate more than usual to mark her territory and signal to males that she’s in heat. She will also be more likely to run off in search of a mate or attract unneutered male dogs into your yard.

Every dog is different. Some become overly affectionate when they’re in heat. Unfortunately, others may become cranky or aggressive with other pets and people. Either way, she’ll need to be supervised closely, especially around young children, and kept away from any intact males in or outside the home.

Aside from the risk of an unexpected litter of puppies, going into heat can be very stressful for your dog. She’ll likely be very anxious and possibly even agitated every time she’s in heat. Repeating this cycle of stress over and over again can be hard on her health.

Every time your dog goes into heat, she can develop a life-threatening uterine infection called pyometra. This happens when the uterus fills up with pus and bacteria and can result in severe illness or death without expensive treatment. According to veterinarians at Bond Vet, where you can spay & neuter your NYC pet, spaying your dog eliminates the risk of this potentially fatal uterine infection.

Female dogs can get breast cancer just like humans can. Having your female dog spayed before she goes into heat for the first time lowers her risk of getting breast cancer significantly.

Statistics show that more than a quarter of unaltered female dogs will develop mammary tumors at some point in their life. About half of those tumors will be malignant and all of them should be surgically removed as a safety precaution.

When a male dog is neutered, his testicles are removed, which effectively eliminates the risk of testicular cancer for his entire life. This is especially important for dogs who have one or two undescended testicles, which greatly increases their risk of developing testicular cancer.

Although neutering won’t prevent prostate cancer in your dog, it will lower his chances of developing prostatic hypertrophy, or an enlarged prostate. Unaltered males are also more prone to prostatitis, which is a bacterial infection in the prostate.

Neutering also reduces the likelihood of your dog developing a perineal hernia, which may require expensive surgery to correct.

Dealing with a surprise litter of puppies is a huge responsibility. Raising them in a clean, healthy environment until they’re at least eight weeks old is a lot of work. You also have to find them suitable homes once they’re weaned. And, the health benefits of spaying or neutering your dog are quite significant. At the end of the day, the rewards of spaying or neutering significantly outweigh any potential risks or drawbacks.