"A dog knot becoming stuck is a problem is unique to dogs. A dog's mode of reproduction and reproduction anatomy is comparatively unique to other animals and humans, which is why dogs possess a different physiology as well. The normal process of mating in dog couples has different stages, of which the last stage is called “tying” or "knotting". This tying results from a swelling of the ventral part of the vascular bulb on a dog's penis, generally called the “dog penis knot”.

A dog knot tying is a normal occurrence and may persist for 2 – 30 minutes. If the dog knot is tied for a longer period of time it is referred to as the dog knot being stuck. In such cases, both partners may experience severe injuries and bruises, which may leave a dog with secondary complications in later stages of the problem.

Overview: Act of Breeding and Tying

Once a male and female dog are convinced that they are suited for each other, a female becomes calm and allows the male dog to mount the female. The dog penis remains semi erect or the erection is practically non existent. The bone on the dorsal side of the canine penis makes the penis appear erect and facilitates copulation.

The normal posture of mounting is described as the male stepping forward and placing both fore legs on either side of the rib cage of the female. The male steps forward with its hind limbs and positions its prepuce (fold of skin that covers the penis) behind the proximity of the female's vulva. At same time, the female elevates its hind quarter and front quarter of her tips downward. The act of breeding or mating initiates with the entry of the sensitive glans penis. The male holds the female tightly with the fore limbs, just below the hind limbs of the female. The intro-mission continues with thrusting and the female might experience discomfort, particularly in cases where she is under age or is experiencing any health problem in the reproductive tract. 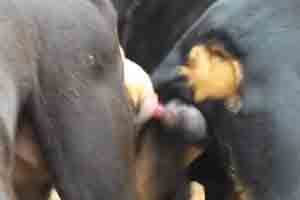 In the normal act of breeding, tying is a normal phenomenon, in which the bulbis glandis or “knot” at the ventral side of penis swells in the vagina due to the high blood supply it contains. At the same time, the muscular band of the vagina, “Constrictor Vestibuli Muscles” constricts and during thrusting both get tied together. This physiological character of dogs is thought to happen in order to allow for the complete ejaculation of sperm into the reproductive tract of the female. After tying, the male brings one of his fore legs over the female and stands beside her, with the genital organs still copulated. One of the two swings and they come into a position where they are facing the opposite direction of each other. This state of union continues till the ejaculation is completed in different stages.

The first portion of canine ejaculation is semen, which is usually 0.5 cc in volume, which is produced by the prostate gland and takes half a minute to complete. This dog ejaculation is followed in a second stage by thick and white sperm rich semen ejaculated in 1 cc volume and takes a couple of minutes to completely ejaculate. The third and final fraction of semen is produced by the prostate gland and is usually measured as more than an ounce of thin fluid, which takes 6 – 45 minutes to complete ejaculation, depending upon the age, breed and size of the dog.

Knot tying is a normal process during the act of mating and may persist for 10 – 30 minutes before both male and female are set free. But, in some cases, it may happen that the knot may get stuck and cause pain, injury, trauma and stress for both male and female. Dog knot becoming stuck is unusual and can be affected by existing pathological conditions (health problems) and any abnormalities in parts of the canine reproductive system.

A Dog penis knot which is stuck is an abnormality in a normal act of dog breeding. It is generally indicated in cases where the tying persists after 45 – 60 minutes of copulation. Symptoms of discomfort, torsion (twisting), pain, blood discharge and aggression in both the male and female surely represents a serious dog knot stuck problem requiring a veterinarian's attention. Complications from injuries on and in the reproductive tract, high blood loss, self injury due to discomfort and secondary infections are common due to a stuck dog knot.

A stuck dog knot  usually occurs due to anatomical defects in the reproductive tract of either male, female or both dogs. Females, when at a younger age, may more commonly experience the condition, therefore immature females should never be preferred for breeding. Similarly, male dogs with health problems related to hypertension and the cardiovascular system may more often experience a dog knot problem due to prolonged swelling of the knot or bulbus on the ventral side of the penis.

Some breeds and middle aged dogs may have characteristics such as a prolonged ejaculation of the third fraction of semen, therefore tying may persist for more than an hour. During this, both male and female may feel discomfort due to the long duration and pretend to be experiencing a dog knot stuck. Such cases of dog knot stuck usually resolve on their own.

The normal act of breeding involves excessive thrusting, pressure, swinging of the body and a fair amount of action and changes in posture. Sudden swinging of the body, pressurized thrusting and an abnormal change in posture may cause torsion twisting) in and/or injury to the canine penis, leaving the couple with a dog knot stuck, which cannot be resolved on its own and which may require minor to major medical and surgical attention.

Some normal acts of dog breeding may appear to be a stuck dog knot problem, which is why any reproduction issue should be carefully examined. Sometimes blood discharge that occurs during copulation may be misunderstood, but mostly these blood fractions are shed by the female reproductive tract, which is a normal mechanism. Similarly, cases of dog knot stuck should be attended to by a veterinarian for proper handling. Forceful pulling apart the male and female or throwing water on the female or both during copulation can lead to a dog knot stuck problem and serious complications. However, an owner should only interfere or call a veterinarian if the time of tie is extended well above the norm.

Both male and female should be checked after the act of mating for any injuries and complications that affect the reproductive organs. Minor injuries and bruises are normal over the female vulva and the male penis may become inflamed and sore for a few hours after copulation due to intense tying. Other symptoms, except the minor inflammations and bruising described should be immediately reported to a veterinarian and proper treatment/management should be carried out.

Have A Question About Canine Reproduction or Story That Can Help Others?

Do you have a Canine Reproduction related Question for our Editors or a Helpful Story to Share? Please include information such as age, sex, breed, medical history, skin and other symptoms, medications your dog is taking, recent changes in behavior, etc. A picture of any visible condition would also be helpful.

What Other Visitors and our Veterinarian has said

How Long For a Dog Knot To Form

My mom and dad have rotties and I was wondering how long it takes for the dog knot to form. We have to hold the female because she just doesn't want to …

Treating Dog Penis Infection After Tie Not rated yet
My 1 1/2 yr old Maltese dog sustained a penis infection after his first successful tie. He was treated and placed on 2 weeks worth of medicine and a cone …