Get the Dog Health Guide Newsletter for Exclusive Content!

Dog aggression behavior is a natural canine behavior that exists in all dogs, some more than others. It is usually provoked by a specific circumstance such as confusion regarding the status of a stranger and is often related to a dog's herding/chasing behavior or prey drive. Most dogs become socialized when on a leash and learn how to control the prey drive. Also herding behavior sometimes looks like predatory behavior when all this type of dog wants to do is to move other animals to a location of their choosing (see our tips for this behavior below). Others don't learn the lesson or act out of fear as a driver of the behavior.

Review the proposed dog aggression training solution below. Other treatment options include modification of the environment and animal handling, drug therapy, or surgery. Any sign of aggressive dog behavior should be addressed to ensure that it doesn't lead to an unacceptable dog behavior problem.

There are many signs of aggressive dog behavior. These include:

In most cases, there is a clear and identifiable reason for aggressive behavior in a dog, although it can be difficult to understand and diagnose.

Understanding which dog breeds are aggressive is harder than you think. Dogs tend to be bred for a purpose. For example, if an owner wants a quiet dog, then a Beagle is not a good choice. If you want a dog that does not exhibit herding behaviors, then avoid dogs such as Border Collies and Australian Shepherds. Studies have not shown inheritability of unpredictable aggression. Said another way, aggression is more specific to an individual dog, then it is to an entire breed. In terms of temperament, research has also shown that there is greater individual variability between dogs across litters than there is for a specific breed. For the most part, behavior is a sign of a dog's individuality.(1) Using dog bite databases, research has shown that the propensity of a dog to bite is in line with the number in the population, indicating that no one breed is more aggressive than another. Studies have not conclusively shown that breeds widely thought to be more aggressive such as Pit bulls are in fact no more aggressive than other breeds.

The American Temperament Test Society does publish a list of dogs and the percentage that failed a temperament test which measures how dogs relate to humans. Note that the majority of dogs in each breed passed the test! Dogs with the lowest scores are:

Medical Causes of Aggression in Dogs

When a veterinarian sees an aggressive dog, they will do a thorough physical and neurological examination. Medical conditions that can cause aggression in dogs include:

There are five primary types of dog aggression behavior. These are listed and described below.

Forms of aggression can include:

Most forms of aggression can be helped by following a training program that involves behavioral modification. This means simply that you reinforce positive behaviors with rewards and remove any actions on your part that can be confusing.

Dogs are pack animals, and your dog views you as a member of his pack. There is always a "pecking order" in the pack. If your dog views you as a step below him in the pecking order, he may respond to what he perceives as challenges to his position with what is called dominant dog behavior. If he is bothered while sleeping or if he is made to move off the bed or couch, he may perceive that as a threat to his dominance. He may also perceive physical restraint, even in the form of a hug, as threatening. Your dog may also be aggressive toward other dogs in order to establish his dominance.

Dogs who display dominance aggression are generally very nice and friendly when they do not feel they are being challenged and they are often described as having a "Jekyll and Hyde" personality.

This occurs when your dog perceives a threat of being harmed. There may not actually be a risk, but your dog perceives it that way. For instance, if you raise your arm suddenly, your dog might be afraid of being hit. He may bite you to protect himself. This type of aggression is particularly common in dogs who have been abused in the past. The key is not to put your dog in crowds or situations that induce fear, but to work up to these situations so that they do not trigger the fear response.

First, make sure you have a good harness so that you can keep your dog from lunging at others. You need to be able to control your dog and move her away from dangerous situations. We recommend the Freedom No-Pull Harness with a separately purchased Double-handled Leash. This type of leash makes it easier to quickly turn a dog away from another dog or person. The two handled leash allows for one end to be attached to the halter and the other attached to the side of the halter. 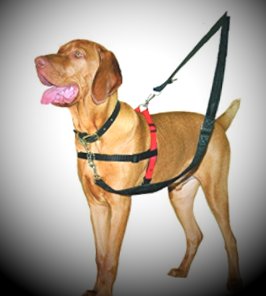 The key to helping your dog is to identify what is causing the fear and then using behavioral modification techniques to help him get over this fear. A typical situation is that your dog is nice to you, but barks at any visitors. Some dogs are only fearful of certain types of people such as children.

To help with this kind of behavior you will need to follow the steps for behavior modification. Be sure not to yell at your dog for exhibiting the wrong behavior as this will enhance his anxiety.

Other ideas to try:

These are all similar forms of dog aggression behavior. Being protective of your family or his space is a natural behavior of dogs. Protective aggression occurs when your dog perceives a threat towards you and becomes aggressive in order to protect you. Possessive aggressive dog behavior occurs when he feels the need to protect his food, toys, or other important things. Territorial aggression occurs when he feels the need to protect his territory. It's important to understand that he not only feel your house and yard is his territory, but other areas as well. If you walk your dog around the block and he urine marks the area, he may feel the whole block is his territory.

The key to treating territorial behavior is to change your dog's perception of what needs to be protected. Steps you can take include:

Exercise with your dog for an hour.

Complaints of aggressive behavior toward the dog owner is the most common behavioral problem brought to veterinarians. There can be several causes for your dog exhibiting this type of behavior:

Some dogs have a strong predatory drive. They might perceive a cat or squirrel as being possible prey. To prepare your dog for another pet in the house consider doing the following:

Babies can be confusing to dogs since they are different then the types of people they are used to. Your dog may not even consider your baby a person.

Introducing a baby starts before the baby actually comes home. Bring home a piece of the baby's clothing so your dog gets used to the scent. When you arrive home have one adult that is not holding the baby greet the dog first. Consider a head collar if your dog is acting aggressively.

Over time allow the dog to come closer to the baby when it is being held in your arms. Be sure that your dog is on a leash and only let him smell, not lick.

If your dog gets jealous provide a Toy by Kong which is a treat filled to keep him distracted and busy. Do not allow your baby and dog to be alone in the same room. Work with a dog behaviorist if their are any signs of aggression or if you are concerned.

Moving From On Leash to Off Leash

Obviously, a dog needs to be well trained and behaving on-leash before moving off leash. Try following the three step solution above first so that your dog runs to you for a treat every time they see another person, animal or dog instead of a fear lunge reaction.

For dogs that need more work, consider limiting off-leash activities to areas such as the woods so that they can get some "off-leash" time to balance out the time in civilization where you need your dog to behave on a leash. An alternative is to try some structured activities such as earth dog courses, lure courses or flyball classes.

Dog Playing Flyball with the Ball Acting As a Substitute for Prey.

Flyball is a sport where four dogs relay a ball to each other as they jump over hurdles. Each dog parent races the dog through as fast as possible so that in catching the balls, the dog finds himself in a fun activity of jumping and running. Getting their mouth on a ball is similar to getting the mouth on prey.

Lure courses help dogs go for "the kill." In a fenced in area a plastic bag is attached to a machine and the dog is let off leash to track the bag as it is pulled along a long line, zigzagging like prey trying to escape.

Earth dog courses are for hounds and small terriers. The course can be a 10-foot tunnel or a long tunnel with turns and twists. An odor is placed along the course leading the dog to a hole to a mock den in the ground that has whatever is being smelled. Dog's do barking and digging to get to the smell.

Agility courses might also be a good option for a dog exhibiting predatory behaviors.

Herding behavior, such as what is seen in Corgi's, can look like aggression behavior. If this is the problem, then consider a herding class. The class will fulfill the dog's need to herd and might provide some relief from the behavior when away from class.

There are three indications for the use of medication when treating dog aggression:

Frequently used medications or drugs are inhibitors of serotonin reuptake (SSRI). The medication is called fluoxetine at a dose of 1-2 mg/kg every 24 hours for a minimum period of 2 to 3 months. Medication doesn't solve the problem, but will reduce any intensity of the aggressive dog behavior.

Neutering males is a first step in treating aggression. The age when neutered does not influence the effectiveness of the surgery, so it is never too late.

Females are sterilized if the aggression has not appeared before the first heat and if when the aggression appears is clearly associated with the entry into estrus, pseudopreganancy or pregnancy, and the aggression reduces when these conditions are no longer present.

Some Dogs have genetic propensities for certain behaviors that make it hard for them to adjust to a crowded human world without a little help. Take the time to teach the right reaction or behavior with positive reinforcement. We do not condone the use of shock collars or punishment, but instead encourage owners to find positive ways to teach their dog the most rewarding reaction to a situation.

Ask Our Vet A Question, We'll Answer It For Free

Have A Dog Behavior Question or Story?

Do you have a question for our veterinarian about Dog behavior? If yes, we will answer it for free.