"Demodex or Demodectic red mange can appear in localized areas or it can affect a dog's entire body (other names are Follicular mange or Demodectic mange). It is caused by the over multiplication of mites in the skin.

The disease name, Red Mange, is based on the reddish skin appearance caused by the condition. Issue such as poor hygiene, bad diet and the presence of intestinal parasites can cause the overgrowth of parasites in the skin.

Demodectic Red Mange is not considered to be contagious and does not require the isolation of infected dogs unless there are dogs present with weakened immune systems. Treatment is dependent on the appearance of the dog and the clinical form.

When the disease is diagnosed and found in more than 5 locations on the body (generalized red mange), it is often accompanied by other diseases such Lymphoma and Cushings."

What Is Red Mange?

Red mange is a condition caused by 3 mite species (Demodex canis - most common, Demodex gotoi and Demodex injai) that naturally live on dogs in low numbers.

Mites are passed from mother to puppy due to the close contact between the animals. The mites burrow deep into the hair follicles. In healthy dogs they are kept under control and do not cause any problems. Since the mites are deep into the follicles, reaching the mites with an insecticide is harder than when treating other parasitic diseases.

In some dogs under age 18 months, with an under developed immune system or inherited condition, the mites multiply into numbers that can cause clinical symptoms such as hair loss, moderate skin itch and pus filled skin pustules. When the disease occurs in older dogs, a veterinarian will look for medications or another condition that might be depressing the immune system such as Cushing's Disease, hypothyroidism or Diabetes.

Diagnosis is complicated by the odds of selecting a skin area which contains a mite, the parasite which causes the condition. If no mite is found after a skin scraping, yet the symptoms look like mange, the mange diagnosis will be confirmed if a dog positively reacts to treatment.

Picture of Demodectic Mange Around Eyes 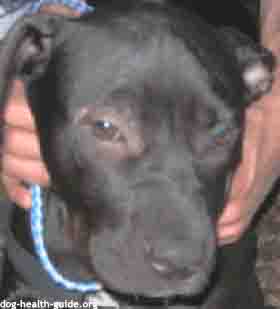 Localized case of Demodectic Red Mange around a dog's eye.
Localized cases in healthy dogs should heal on their own.

In this form of mange a dog will have 5 or less circular bald skin patches along with some skin redness and possibly swelling. The mites are found in dogs that have had some type of stress which negatively affected the immune system.

These cases usually heal on their own in under 2 months with no treatment.

In 10% of dogs the condition spreads all over the body (called becoming generalized.) It is common for a veterinarian to recheck a dog to make sure that the disease has not spread into the generalized form. 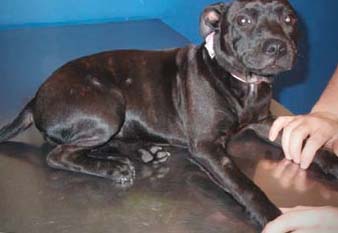 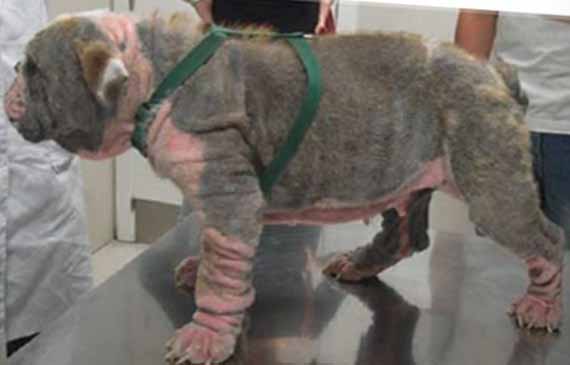 If a dog meets the following clinical criteria it is considered to have generalized juvenile demodicosis:

Treatment for this form of red mange includes a miticide and antibiotics. Relapses are common requiring that dogs be checked annually for the disease.  A very small number of dogs do not respond to treatment and are euthanized.

Adult-onset Canine Demodicosis is seen in dogs older than 3 years of age. It is usually accompanied by other diseases that have depressed the immune system such as issue with the endocrine system or cancerous malignancies.  It can also be see in dogs that are receiving glucocorticoids.

Mites are only found in 50% of Mange cases. Diagnosis is difficult since constant scratching might remove the mites from a particular skin area, leaving behind skin sores and lesions (caused by toxins left behind by the mites). This makes scrape tests where the skin is scraped and looked at under the microscope unpredictable.

Most veterinarians will treat for mange as a way of diagnosing the problem. If symptoms subside after 2 to 4 weeks, then it is assumed that your pet has mange.

The following conditions need to be ruled out when diagnosing demodectic mange since they can cause a similar skin appearance: