"Canine kidney failure (renal failure) can develop immediately, or over months or years. It can occur suddenly, referred to as acute kidney failure, or over time, a condition referred to as chronic kidney failure (CKD). When a renal disease lasts for more than 3 months it is considered to be chronic. All breeds, sexes and ages can be affected.The kidneys remove waste and toxins from the blood. When the kidneys aren't working, these accumulate in the body, causing problems such as increased urination and thirst.

Causes of acute or sudden kidney failure include dehydration, poisoning or a blockage and are reversible in some cases.  The chronic form of the disease has an unknown cause (although damage to the renal tubes is suspected) and is not reversible, resulting in death in months or up to four years. Dietary change is the only affordable treatment that has been shown to slow down the  progression of the chronic form of the disease. Dialysis, or as a last resort, kidney transplantation can save the patient, although the costs can be prohibitive for most owners (see below)."

Canine kidney disease is diagnosed when the kidneys are not removing toxins from the bloodstream as well as they should. If toxins build to dangerous levels it becomes a condition called azotemia. A case is chronic is it lasts for more than 3 years. Other terms for the disorder are renal insufficiency or renal failure. The percentage of dogs with the condition increases with age, with the highest incidence in dogs over 15 years of age.

It is very difficult to treat existing kidney damage once it is discovered.

There are four stages of canine kidney disease determined by tests conducted over several weeks after a patient is hydrated and is coming off of a fast. Dogs in stages 1 and 2 may not show any symptoms.

Stage 1: Toxins in the blood have not reached dangerous levels.

Stage 2: No symptoms, but there are toxins in the blood

Stage 3: When your dog is showing symptoms of kidney disease

Stage 4: Kidney damage is advancing and your dog is showing significant symptoms such as lethargic behavior. 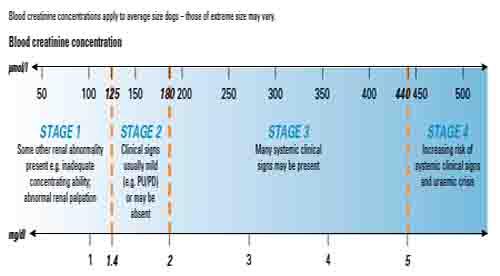 Canine kidney failure that happens suddenly is usually caused by one of the following:

Chronic Kidney failure can occur slowly over months or years without showing any symptoms. While the exact cause is not known, it is suspected that damage to the renal tubes is the underlying cause. Health problems in dogs that can lead to chronic dog kidney disease include: 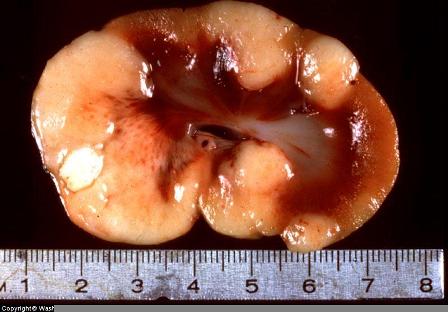 Across all breeds the incidence of kidney failure is 9 cases per 1,000 dogs.

There are several breeds that have a higher incidence of canine kidney failure due to genetics:


Abnormal kidney growth due to genetics (renal dysplasia) is seen in the following breeds:

In most dogs, symptoms appear suddenly. The canine kidney failure symptoms associated with kidney disease are also common in other diseases. Several body systems are affected including the cardiovascular, endocrine, immune, gastrointestinal and neuromuscular systems. 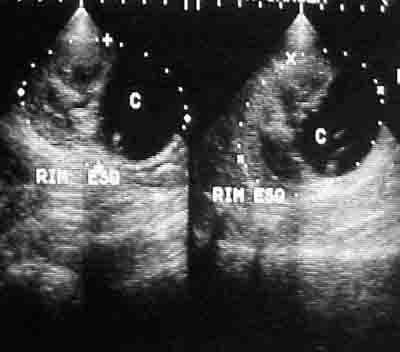 X-Ray of Canine Kidney Failure in Patient Suffering From Frequent Urinary Tract Infections and Uremia (excess waste products in the blood). X-Ray revealed enlargement of the left kidney which was removed in surgery. The patient died several days after surgery even though one kidney was normal in size and function.(3)

Dog kidney disease is diagnosed through routine blood and urine tests. Results of the tests will indicate if a patient even has kidney disease and how far and how fast it is progressing (called a renal evaluation). The average age at diagnosis is 7 years old.

Tests measure if the urine is of the proper consistency, blood urea nitrogen (BUN) levels and creatinine levels. Even kidneys that are functioning as low as 25% of normal might not be a problem. X-rays and ultrasound tests will indicate the shape of the kidneys.


A veterinarian will look for many of the aforementioned symptoms, reduced body temperature and changes to the shape of the kidneys (enlarged, small). Signs of acute renal failure in particular are enlarged kidneys and a short time span for symptoms.


Before reaching a specific diagnosis, diseases with similar symptoms need to be ruled out such as a urinary tract infection.

Treatment options for canine kidney disease usually depends on the severity of the condition (stage that the disease is in) and the underlying cause. Patients that have toxins in the blood at critical levels will be treated to address fluid and electrolyte deficiency (called a uremic crisis).

Dogs in stage 3 or 4 kidney failure are monitored every 1 to 3 months. If only one of the two kidneys is diseased, just one kidney can be removed, a procedure called a nefrectomy.

The cost of canine kidney disease treatment can vary based on the progression of the problem. This can range from several hundred dollars a month for supportive care to thousands of dollars for dialysis or transplantation.

Medications such as antihypertensive agents with specific intrarenal effects such as ACE inhibitors have had a positive impact on renal diseases.

For acute forms of the diseases, the first step is to eliminate anything that may be causing the kidney disease such as:

The kidney's could be helped by:

If the kidney disease is reversible then your veterinarian may recommend an expensive treatment option such as dialysis. This is used in cases such as antifreeze poisoning. It is possible for dogs to receive a kidney transplant.

Treatment for canine kidney disease can include:

Dog Dialysis in Cases for Chronic and Acute Kidney Disease

Hemodialysis for canine kidney failure is available to treat acute and chronic cases of the disease. In this procedure a catheter is attached to the dog while the dialysis machine removes toxins from the blood (dogs need to tolerate having a catheter attached). The cost of care is estimated to be between $20,000 to $25,000 for the initial 2 to 3 weeks of treatment. Owners also need to live near the dialysis center.

For chronic kidney disease a dog would need lifetime dialysis, resulting in even higher costs. For acute kidney failure, dialysis can make more sense since the treatment is short term.

Several veterinary hospitals can perform kidney transplants in dogs. Unfortunately survival rates in 50% of patients are 2 months or less.(1) Transplants can cost as much as $15,000, preceded by dialysis and other forms of supportive care (before and after) that can bring the total to $100,000 (U.S.).

Post surgery medications such as rejection prevention medications are required for the life of the dog and will cost more in larger breeds.

Recent research studies show that dietary change to a commercial food made for kidney or renal problems can both improve your dog's quality of life and extend the number of years your dog can live with the disease. The diets work by decreasing phosphorus levels and by supplementing the diet with omega 3 fatty acids. The results is longer survival times, although researchers have not identified the specific part of the diet that is leading to the improvements in lifespan. See our guide on diets for Canine Kidney Disease (CDK).

Ask Our Vet A Question, We'll Answer It For Free

Have a Dog Kidney Disease Question For Our Editors or A Story to Tell About This Topic?

Do you have a dog kidney related question for our editors or a helpful story to share? Please include information such as age, sex, breed, medical history, symptoms, diet, changes in behavior and medications.