"Canine hypothyroidism is a condition that is usually caused by an autoimmune disease. It occurs when a dog's immune system attacks the thyroid gland, resulting in destroyed tissue (also called lymphocytic thyroiditis).

This destruction results in abnormal gland function and a decline in the amount of hormone produced by the thyroid gland. Since this hormone regulates many body functions, dogs experience multiple symptoms such as hair loss, weight gain and lethargy.

Diagnosis includes blood and other tests to confirm that symptoms are due to hypothyroidism and not some other disorder. The disease rarely occurs before age 4, with an average age of 7. The incidence is 1 in every 250 dogs."

Lifelong treatment is required and includes synthetic hormone replacement therapy combined with supportive treatments such as dietary supplements that promote thyroid health and skin condition. The dose will be adjusted until the right levels of hormone therapy is identified. Most clinical symptoms will disappear once hormonal levels return to normal.

If left untreated dogs can suffer from atherosclerosis (build up of plaque that causes heart disease) or can fall into a mental stupor along with other disorders that can cause death.

Hypothyroidism in dogs is a disorder of the thyroid gland, a small gland in the neck attached to the trachea and below the larynx. Its primary function is to regulate metabolism. It has many functions, but is best known for regulating the metabolism. Specifically it speeds up the heart rate, respiratory rate and the replacement of cells. Over time, the disease can get progressively worse.

Hypothyroidism canine occurs when the thyroid becomes underactive and does not secrete enough thyroid thyroglobilin hormone. Since the thyroid is underactive, metabolism is decreased.

In the remaining 5% of cases there could be a tumor present (called neoplastic destruction of thyroid tissue), an iodine deficiency, infection or thyroid destruction due to radioiodine treatment, as the result of a surgery or a reaction to medications.

This type of hypothyroidism canine refers to problems in the hypothalamic region of the dog's brain. In these cases TSH production doesn't exist or is at low levels due to abnormal brain function.

The disease generally occurs in dogs age 4 to 10, and has a higher prevalence in certain small and and large breed dogs.

There is a form of hypothyroidism canine called congenital hypothyroidism that involves enlarged (called goitrous) or normal sized thyroid gland (non-goitrous). The condition results in too much TSH being released. Breeds susceptible to this form of the disease are Giant schnauzers and Toy fox terriers. The condition is also seen in dogs where there is below normal secretion of hormones from the pituitary gland (called panhypopituitarism).

When dogs have another disease it can affect T4 levels. Correcting levels in this case with hormone replacement therapy can be dangerous and may harm the patient. For this reason, veterinarians will base the diagnosis on more than just a test of T4 levels. Skin problems are not a common cause of Euthryroid Sick Syndrome, however, deep skin infections (pyoderma) and generalized demodicosis mange. 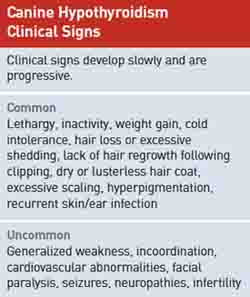 Dog hypothyroidism symptoms are consistent with a clear slowing down of your dog including reduced levels of energy, a reluctance to go for walks, avoidance of play or just tiring out earlier than normal. Said another way, the mental status and physical activity of the dog declines. Other symptoms include weight gain without increase in food consumption, intolerance to cold, and changes to appearance such as a loss of coat shine (dull look), hair loss (it is common to see hair that has been cut grow back more slowly than usual), seborrhea and dry skin.

Three of the symptoms, hair loss (on both sides of the body, usually on the trunk), weight gain and lethargy are seen together in 40% to 50% of all cases. Hair loss alone is a characteristic of 80% of cases.

Other symptoms can include infections on the skin (pyoderma), which is recorded in 14% of cases. Infections are caused when hormonal changes make the skin susceptible to infection. Skin changes that could indicate hypothyroidism in dogs include thickening of the skin and skin swelling (myxedema).

In a minority of cases, owners will see hyper pigmentation (black spots, in 10% of cases). Less than 5% of cases symptoms can include conjunctivitis and facial paralysis.

Male dogs can see a decline in fertility while females can have prolonged periods or a failure to move through their cycle.

Since the thyroid regulates metabolism, most major systems of the body are affected including:

With so many body systems potentially being involved, symptoms are not always the best indicator of the disease.

Hypothyroidism in Dogs That Show No Symptoms

Symptoms in hypothyroid dogs develop slowly, with some patients appearing asymptomatic (without symptoms). This does not mean that treatment isn't required. In general, dogs that are acting healthy and have none of the dog hypothyroidism symptoms associated with the disease should not be tested for T4. The test is best used when a Veterinarian suspects that a dog's symptoms can be explained by the disease. False-positive test are common and a lower result will just require additional tests that are not necessary.

Dog hypothyroidism symptoms include alopecia (hair loss) and lesions on the skin which spread from the  dorsal (back) to ventral (abdomen) surface. Lesions then move to the inner thigh. Areas could bleed, and turn black in color. 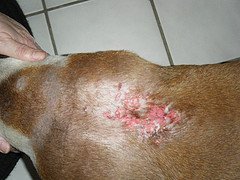 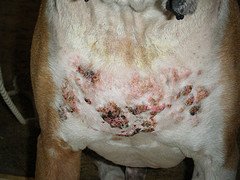 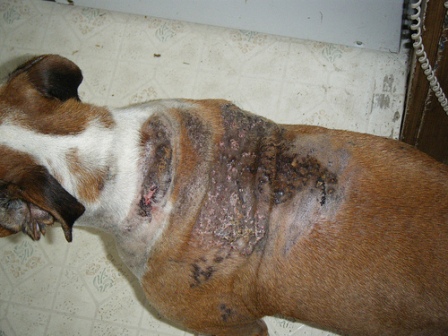 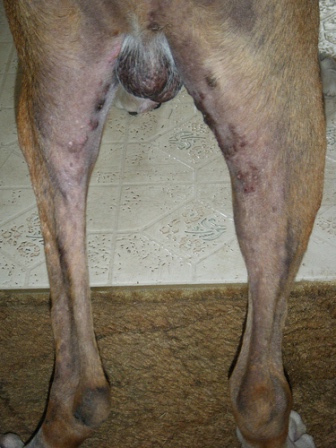 Have A Question About Hypothyroidsim or Story That Can Help Others?

Do you have a Canine Hypothyroidism related Question for our Editors or a Helpful Story to Share? Please include information such as age, sex, breed, medical history, skin and other symptoms, medications your dog is taking, recent changes in behavior, etc. A picture of the condition would also be helpful.

What Other Readers Have Asked and Suggestions from our Vet

I have a 9.5 yr old Boxer named Rebel, colored tan and white. My dog weighs 50 pounds down from 55 pounds,the weight prior to the illness. The illness …

Is weight loss typical of Hypothyroidism? Not rated yet
My German Shepherd is just turning 6. 2 months ago he had 4 seizures in a two week span. Took his sugars at the time, as I am a Type 1 diabetic, and they …