"Dog bleeding and how to treat it depends on the area of your dog, the underlying cause and the size of the wound. In all cases apply pressure to the wound and consult with a veterinarian. Only the smallest surface wounds can be treated at home by applying pressure and then irrigating the wound."

It is important to be prepared to apply first aid for dog bleeding if necessary. The type of first aid depends on the location and extent of the bleeding.

DO NOT put hydrogen peroxide on a wound as it might start the bleeding again. Also, do not wipe a wound that is stopped bleeding. 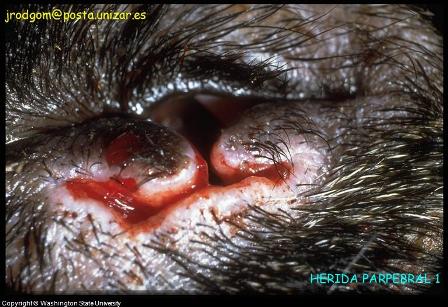 There are several steps to treating a bleeding wound:

For minor scratches some owners like to apply an ointment made from natural substances to promote natural healing after the application of antibiotics. Pet Alive Wound Dr. is all natural and made specifically to help heal dog wounds.

Injuries to the paw are often caused by glass, thorns, and other sharp objects. If necessary, clip the hair around the injured area so you can see it better. If you see any foreign objects, try to remove them with your fingers or with tweezers. If the tissue below the wound appears to pass by when you move the skin, it probably needs stitches.

Flush the wound with water and apply a clean dressing. If the bleeding doesn't stop in five minutes or if you think the wound may need stitches, take your dog to the vet.

A dog bleeding from the mouth may mean that there is a severe wound. Take your dog to an emergency veterinary care center.

Bleeding from the vulva could mean a miscarriage or gynecological infection.

A female dog that is bleeding and who is not in heat may be suffering from a gynecological infection called Pyometra. This condition involves an infection in the womb resulting in green or red thick discharge. This is a serious problem that may require surgery to save your dog's life and in severe cases removal of the ovaries and the womb.

If the blood is thin then it could be an Ovarian Cyst. Treatment involves hormone therapy or a hysterectomy.

If your dog has an itchy ear, it may result in scratching. Too much scratching will cause bleeding in the area between the skin and the cartilage of the ear flap (called a aural hematoma). The ear flap itself would be painful, warm to the touch and swollen.

It is not known what causes aural hematomas. Treatment involves surgery to remove the blood clot causing the condition. While surgery is not needed in all cases, most cases require this course of treatment. If you do not do the surgery the irritation may not go away.

Dog bleeding from the penis can be due to a bladder infection or prostate problem. Injuries to the penis such as if your dog was in a fight with another dog could also be the cause. Given the need for treatment see your veterinarian immediately.

If there is an injury to the chest and you can hear a "sucking" sound, bandage the wound tightly enough to prevent air from entering and take your dog to the vet immediately.

If you see the wound and it is smaller than 1/2 inch, then apply pressure and see if the bleeding stops. If it doesn't then a stitch might be needed. Wrap a crepe bandage around your dog's body and then hold in place with tape on the bandage surface only.

If there is a protruding object, like an arrow, do NOT try to remove it. Instead, put gauze dressings or clean towels around the entry point and tape them in place. Take your dog to the vet immediately.

Otherwise, treat as you would any other dog bleeding. Apply pressure and if the wound does not stop bleeding in five minutes or if you think it may need stitches, take your dog to the vet.

Dog health - blood in urine can be due to multiple causes including infection, internal bleeding, bladder or kidney stones, problems with the urethra (tube that connects bladder to the outside of the body), tumor or from unknown causes.

Your veterinarian will look for an infection or stones first, which are the most likely causes.

Dog blood in stool is usually caused by parasites (hookworm, whipworm) or from some type of gastrointestinal problem such as a food intolerance or if your dog ingested a foreign object. Treatment involves removing the underlying cause and possibly dietary change. In rare cases the condition can be caused by a tumor.

If blood in on the stool (vs. mixed into the stool) then the issue is usually caused by some type of problem that is localized to the anus such as an obstruction or from your dog straining to defecate.

There are 12 dog blood types. Dog blood is different than human blood in that it doesn't naturally have antibodies. Without antibodies most dogs have compatible blood. After the first transfusion this changes and only specific types of blood can be transfused to what is called "cross matched" dogs. Blood comes from either dogs owned by your veterinarian or from donor pets.

Your veterinarian may check your dog's blood pressure dog's blood pressure as part of an examination for bleeding. Pressure is either taken with a cuff on the leg or with a stethoscope like device. Taking accurate readings is a challenge. Even when you have an accurate reading, their are no established norms by breed for what is normal. High readings where levels are over 160 (systolic) and over 100 (diastolic) are cause for concern and warrant further examination for the causes of high blood pressure.

Canine blood transfusion is necessary in cases of anemia (low red blood cell count), hemorrhage (bleeding), surgery, or other dog blood disorders. Depending on the problem, canine blood will be transfused as whole blood or with just part of the blood such as plasma or platelets.