"Dog herpes is causes by direct contact with fluids from another dog. It rarely causes symptoms in adult dogs and can be fatal in pups under 2 years of age. There is no treatment for adults and puppies that are showing symptoms. Pups in exposed litters can be helped by antiviral drugs."

Canine herpes is most often seen in neonatal pups. Causes include poor temperature control at the breeder and immature immune systems up to 10 days after birth.

The virus grows only in canine cells and tends to be grow in either the kidney or the testicles. 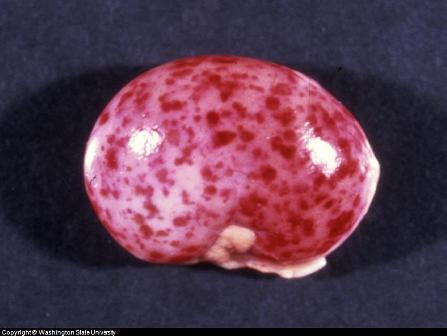 Dog Herpes as seen in a canine kidney, one of the locations where the virus grows
Source: George Washington University

The virus is spread via direct contact with bodily fluids that contain the infection. It cannot be picked up from an infected surface since the virus doesn't survive well in the environment.

If caught the disease is fatal in pups. Those that do survive can have problems with the central nervous system. If caught after age 2 weeks usually survive. The disease lasts 1 to 3 days.

The virus causes conjunctivitis or dog red eye as a minor symptom. Conjunctivitis is a condition where the white part that surrounds the eye becomes inflamed or is the cause of a corneal ulcer (wound on the surface of the eye).

Canine herpes generally does not cause symptoms in dogs older than 2 weeks. If pups and adults do show symptoms, they include:

The virus can be diagnosed through testing in the lab with fluorescent antibody staining of tissues.

Drugs for dog herpesvirus have been generally unsuccessful. Pups that are treated before the onset of symptoms (if you know a letter has been exposed) can see success, although other problems can occur such as issues with the heart and central nervous system.

Once symptoms are present in pups, treatments tend to be ineffective.