Care and Treatment of Canine Lymphosarcoma

"Canine lymphosarcoma (canine lymphoma) is a cancerous condition of the lymph glands and other organs made up of lymph tissue such as the spleen and liver. Symptoms vary based on the location of the problem. Treatment involves chemotherapy which can be effective in putting the disease into remission."

Lymphosarcoma also goes by the names lymphoma and malignant lymphoma. All refer to a solid neoplasm or tumor in organs that have lymph tissue such as the lymph nodes themselves, spleen, liver and bone marrow. Lymphoid leukemia is a separate disease.

Lymphosarcoma is one of the most common cancers found in dogs. It can be treated in several ways with 65% to 96% of dogs going into remission with treatment, for a period of 6 to 9 months. If the lymphosarcoma returns and is treated, and a second remission is achieved, it usually lasts 10 to 12 months. 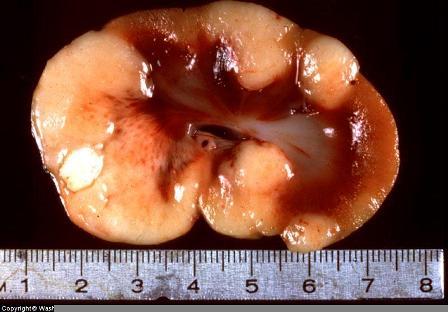 It is not clear what causes lymphosarcoma in dogs. It is suspected that heredity, breed (Boxer Dogs are predisposed, for example), exposure to sunlight (uv radiation) and skin tumors may play a role.

Symptoms depend on the area of the body affected by the disease. Different areas result in different symptoms.

Lymphosarcoma is difficult to diagnosis without a tissue sample. The reason is if malignant cells spread they can impact different areas of the body, creating differences between patients.

Diagnosis involves a blood test, X-rays and physical examination. During the exam your dog's lymph nodes in the armpit, groin, neck and chest will be checked for swelling. Your veterinarian may use a test called a fine needle aspiration to take a sample of cells for testing in the laboratory.

Treatment of Lymphosarcoma in Dogs

The drug prednisone has shown to achieve a complete or partial remission rate of 30 - 60 days in approximately 50% of dogs. Another drug, doxorubicin is considered to be the most effective drug. From 41% to 76% of dogs respond to the drug and remission lasts from 52 - 219 days. Survival time is from 100 to 300 days. 17% of dogs treated with doxorubicin had a full remission with 33% of all dogs treated still alive after 1 year, and 20% after 2 years.

Most treatment plans use more than one drug. A drug protocol called COP (cyclophosphamide, vincristine and prednisone) is given to your dog for 6 weeks followed by methotrexate, higher dose cyclophosphamide and lower dose prednisone for an additional 6 weeks. This continues for 1 year. 69% of dogs achieved either a complete remission or partial remission. The median survival time was 123 days.

Another protocol (UW-M) claims to have achieved the longest remission time using vincristine, L-asparaginase, chlorambucil, methotrexate, and doxorubicin. This approach for treatment lasts 3 years with 84% of dogs achieving complete remission and 7% of dogs getting partial remission.