"Recent breakthroughs in research and effective treatments have brought us one step close closer to a canine lymphoma cure. For now, it is the most treatable, but not curable type of dog tumor. The most effective treatment option is chemotherapy, although the combination of chemo with immunotherapy shows promise.

Lymphoma tumors are the most common type of dog tumor. A malignant lymphoma tumor is also referred to as a lymphosarcoma. There are several forms of lymphoma, with the most common referred to as b-cell Lymphoma (70% of cases), NHL or non-Hodgkin lymphoma. Dogs respond well to chemotherapy, particularly if the cancer is diagnosed early. Unfortunately, most dogs treated with chemotherapy for b-cell lymphoma see remission of only one year (median is 9 months), however, the two year survival rate is 20%.

One of the problems with chemotherapy is that it causes a change in balance between two types of t-cells (cytotoxic cells and helper cells). Trials are under way where a dog's own t-cells are removed, and then reintroduced to the dog, restoring the required balance. In trials, researchers are able to extend remission 9 months longer than with chemotherapy alone. A link is provided at the bottom of this page if you are interested in enrolling your dog in the latest clinical trials. If lymphoma in dogs is not treated, it can be terminal in as little as 4 weeks. Results from the studies with dogs are also used to help people with lymphoma."

Finding the right treatment options or a canine lymphoma cure for your dog can be difficult. Canine lymphoma is a common form of cancer found in dogs (cancer of the lymph node). This type of cancer metastasizes (spreads) quickly and needs to be treated the moment it is discovered. It is very treatable since it is highly responsive to chemotherapy treatment. The most commonly seen type of lymphoma seen in dogs is NHL or non-Hodgkin's lymphoma. Dogs that have lymphoma are usually middle-aged. If a diagnosis is made early, the cancer will disappear in 75% of dogs for 6 months or more.

Lymph nodes can be found throughout your dog’s body. Early stages of the disease have the cancer localized to one lymph node or area of the body. If the cancer has spread, it can be found in the spleen, liver, or bone marrow.

If lymphoma is not treated, it can spread in 1 to 2 months from first symptom to being terminal.

Lymphoma in dogs occurs in 24 out of every 100,000 dogs. It is one of the most common neoplastic diseases.

Enlargement of the lymph nodes can be caused by cancer or infection. For example, finding two large lumps under the jaw is a common symptoms. If your veterinarian sees one, they will look for others to see if the cancer spread. A fine needle aspiration test (FNA) will be used to test the cells in the node. If the finding is that cancer is present or is inconclusive (no clear answer), your veterinarian may choose to remove one lymph node for testing.

Nodes can be found behind the lower jaw, where the neck meets the body, behind the front leg, in front of the back leg, and midway down in back of the hind leg.

Before your veterinarian identifies a treatment plan or cure for canine lymphoma, the spread of lymphoma is tested with a chest x-ray, ultrasound and a bone marrow biopsy. 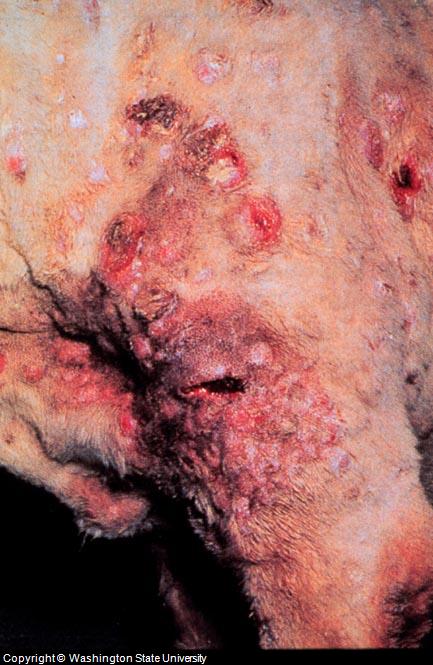 Cutaneous Skin Lymphoma in a dog can form in either a single or in multiple lesions
Source: Washington State University

The goal of any lymphoma cure or canine lymphoma treatment is to cause extended remission (absence of symptoms that could return) vs. a full cure, which may or may not be possible depending on the extent of the disease. There are many chemotherapy drugs available for treatment.

In this video a Bermese Mountain Dog has a positive canine lymphoma treatment outcome after consultation with Veterinary Cancer Specialists in Englewood, Colorado.

Chemotherapy is used for treatment and is administered in the following pattern:

Dogs tend to tolerate chemotherapy better than people, and with a higher rate of success. If the cancer returns, another round of chemotherapy could be effective. Chemotherapy uses a combination of cyclophosphamide, vincristine and prednisone (CHOP chemotherapy protocol is commonly used). This combination results in a complete cure of canine lymphoma or remission in about 70%-84% of dogs for approximately 4 to 9 months. 50% of dogs were still alive after one year.

If your dog has a relapse after treatment, in most cases another treatment series of chemotherapy has shown to be effective.

The downside of chemotherapy in dogs is that it can interfere with the dog's immune system. There is a new immunotherapy treatment being developed by Texas A&M and UT MD Anderson that has shown promising results in lengthening the time of remission.

Researchers have discovered that if t-cells are removed (an important component of immune system function) from the dog and then returned to the dog after chemotherapy, the t-cells help to fight the B-cell lymphoma.

While this has been an important and promising discovery, currently researchers have found it challenging to collect enough t-cells from a patient, and there are also limitations to the number of infusions a canine patient can receive. The same research team is also exploring other solutions for treatments and cures for canine lymphoma, such as the modification of t-cells genetically. 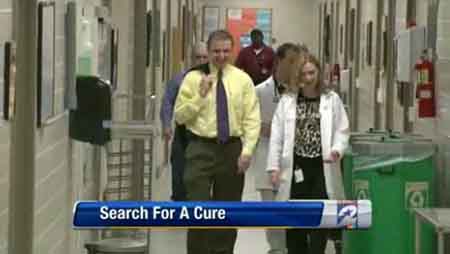 To enroll your dog in t-cell clinical trials visit this page on the Texas A&M University Veterinary Medicine website. There is also work being done on a canine non-Hodgkin's Lymphoma vaccine which in trials has also shown an increase in the length of remission.

As with all treatments, your veterinarian will have the latest research on canine lymphoma cures and the best treatment options. There are also homeopathics available such as C-Caps that can be used after chemotherapy treatment to help boost immunity and improve cellular health.