The signs of whelping are not the same in all dogs but can include temperature change, pacing, nesting behavior, digging, hiding in the dark and milk expression from the teats. In the last 3 weeks there may be some vaginal discharge. Veterinarians recommend that whelping be done at home to avoid the chance of exposure to infection in a medical setting.

Whelping Video - Signs at Each Stage of Pregnancy Whelping Signs

The gestation period for puppies is approximately 61 to 65 days give or take 1 day. If it's been more than 65 days and you still don't see any whelping signs in your dog, talk to your vet. Breeding to whelping takes between 55 to 70 days because male sperm can survive within the female for 7 to 9 days prior to fertilizing the egg.

Tip: Call your veterinarian before whelping begins. Give the Vet the due date. Ask about emergency procedures if whelping occurs in the middle of the night.

There are a number of whelping signs you can notice when your female dog is close to giving birth. You may have to pay close attention to notice these signs as describe below. Some or all of these whelping signs may be present.  Prepare the whelping box ahead of time (12 weeks before puppies are born - approx. 4" x 5' is ideal, with sides of approximately 2-1/2" - see how to make a dog whelping box.

Role of Body Temperature in Whelping

Starting at day 56 you should be recording temperatures around 99 to 100.6. The temperature could rise to approximately 101.4 before falling to around 98 or lower. When you read 98 expect delivery within 24 hours. Other whelping signs include panting, digging behavior, hiding in the dark and dilation of the pupils.

How to Take Dog Temperature:

Calculate a litter due date based on the date of breeding. The calculator uses a 63 day period to determine puppy birth date:

First download this perpetual dog whelping chart. Next mark the date the female was inseminated (also referred to as being bred). The date of delivery will be approximately 61 days later as indicated on the chart. The sperm take 2 days to penetrate the egg. If your female dog ovulates on the 11th day of the cycle, then assume that she conceived on the 13th day (48 hours or 2 days later).

What to Expect During the Three Stages of Bitch Labor

The first signs of whelping can appear as early as 22 days. Your veterinarian may be able to see swelling of the uterus. Your veterinarian may be able to detect this via a process called palpitation, which is using the hand to judge changes in the uterus via feeling the abdomen. Ultrasound equipment may detect a heartbeat which is considered to be the most reliable indicator of pregnancy. By day 46 you should be able to detect swelling in the mammary glands. This is also the first point where x-rays can capture an image of the fetus. 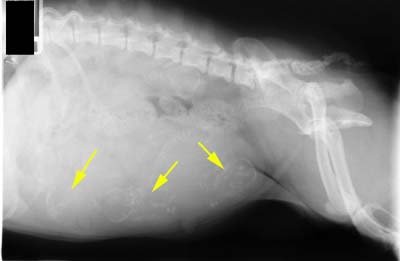 What to Watch For:

She will probably stop eating a day or so before giving birth. She may also vomit or have diarrhea. However, some dogs will eat right up until giving birth. Again, these are some whelping signs to watch for, but they won't all be present in all dogs.

Another  of the whelping signs is a "glazed look" on her face. This is hard to describe but you will know it when you see it.

She will often be restless. She may pace or turn in circles, pace, pant or lie down and then get up again.

If you've prepared a whelping box for your dog, she may dig in the blankets or towels you've arranged for her. This is called "nesting". She's preparing a place for her babies. She may also take various objects that she likes to her nest.

She will look at or lick under her tail. She will probably do this the entire day of her whelping and throughout her labor.

Other whelping signs during the week before birth include:

Her teats and mammary glands will look swollen with milk on the day of her whelping. Milk can be expressed from her teats near the time of whelping for first-time mothers, and about four days before whelping for those who have had litters before.

Once labor begins, she will pant and sometimes moan. You may notice her legs and stomach tense and then relax. As contractions progress, she will arch her back with the contractions. At this point, the pups will soon be born.

Monitoring the Signs of Whelping

Veterinarians have many of the same monitoring devices that humans have including fetal and uterine monitors. The goal is to monitor labor to ensure that there is nothing that could prevent a successful birth.

How to build a whelping box