"A variety of medications, supplements, and surgical techniques are available for treating arthritis in dogs. Veterinarians try medications first, and then use surgery to improve the way joints are aligned or to eliminate any bone-on-bone contact.

Veterinarians also recommend weight loss to take stress off of joints along with moderate amounts of exercise. Physical therapy after surgery can be beneficial. Techniques will work to maintain or increase joint motion.

Diet will be addressed for dogs that are overweight, since weight creates joint stress. The addition of Omega 6 and 3 fatty acids as a supplement can help to reduce joint inflammation and the production of some prostaglandins.

Patients are monitored for any change in condition and to adjust the dosage of recommended medications." 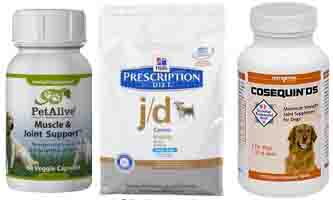 Over-the-counter dog arthritis medication and supplement options include (left to right): Natural Remedies Muscle & Joint Support, foods fortified with omega 3 and 6 fatty acids such as Hills j/d formula, and dietary supplements such as Cosequin to help joint pain and mobility.

Arthritis prescription medicines for dogs are usually a class of medications called NSAIDs. These drugs can help to relieve arthritis-related discomfort and joint problems associated with canine osteoarthritis. The problem is that all NSAIDs can have gastrointestinal upset as a side effect. Because of this a veterinarian will only recommend the use of these medications when needed and in limited doses and for limited periods of time.

This may be supplemented with safe dietary supplements such as glucosamine and chondroitin, and the fatty acid supplements Omega 3 and 6. Other treatments involve losing weight if overweight, creating an exercise plan (at home and with additional help such as physical therapy if needed), and in some cases surgery.

Canine arthritis pain relief treatment often includes non-steroidal anti-inflammatory drugs (NSAIDS). Each dog arthritis medication can help to relieve inflammation while also relieving pain. Mild self-limiting side effects are common and may require monitoring via blood tests to check for liver and kidney problems. Since stomach problems are the number one side effect, other drugs might be prescribed to protect the stomach. Serious side effects are rare, but can include death. They can occur even when the product is used as prescribed.

Note: Human pain and arthritis medications or NSAIDs such as Advil can be lethal (deadly) for dogs. It can also trigger liver and kidney disease in addition to gastrointestinal problems.

Other NSAIDS prescribed by vets include:

These drugs are effective at managing symptoms of arthritis, but they don't slow the progression of the disease.

Certain medications can be toxic to dogs. Ibuprofen can be dangerous due the potential formation of ulcers. Acetaminophen could be problematic as well. Aspirin could be a good alternative as long as you don’t see any change in your dog such as loss of appetite within 24 hours.

Again, only use NSAIDS, aspirin, or any other dog arthritis medication under the advice of a veterinarian as they can be toxic, particularly in small dogs.

A variety of natural products including antioxidants, nutraceuticals and homeopathic remedies are helpful in the management of canine arthritis.

SAMe is an antioxidant that is showing promise in recent research by the University of Illinois for helping to reduce join inflammation without the side effects associated with prescription medications such as NSAIDs. It is thought that SAMe participates in the making of genetic material, known as DNA, and cartilage.

In clinical studies with humans this antioxidant has been shown to have a positive impact on arthritis. Canine clinical studies are now underway at the University of Illinois. This antioxidant is recommended for dogs that cannot take NSAIDs due to pre-existing liver or kidney problems, or for owners that want to avoid the side effects of prescription products. As with all medical choices consult with a veterinarian regarding this new dog arthritis option.

Other natural homeopathic ingredients to consider include:

A good and reasonably priced source for a supplement that combines all of these homeopathic ingredients is Muscle & Joint Support Formula, which is specifically formulated to treat symptoms, relieve pain and reduce stiffness of canine arthritis, rheumatism and degenerative joint disease in dogs. It also comes with a one year satisfaction guarantee.

The nutracueticals Glucosamine and Chondroitin are supplements often used to help rebuild cartilage for arthritis dog pain relief. There is plenty of anecdotal evidence that they are effective in dogs with most evidence supporting glucosamine over chrondroitin. They are safe to use in combination with other arthritis treatments, so there is no downside to using them except the cost. Cosequin DS is the #1 veterinarian recommended glucosamine and chondroitin supplement.

Glucosamine works by providing building blocks that help to form joint fluid and new cartilage. This improves joint lubrication and overall health. Chondroitin sulfate works by reducing degenerative enzymes that break down cartilage in a joint. Chondroitin also improves joint lubrication. Both glucosamine and chondroitin are used together. The goal is to improve the osteoarthritis condition enough so that the use of NSAIDS and their related side effects (such as stomach problems) can be reduced or even avoided.

Perna is found in New Zealand Mussels and contains glycosaminoglycans (GAGs). This substance lubricates the joints. It is a natural anti-inflamatory. As a joint treatment it may have limited effect since it is not easily absorbed when administered orally.

Methylsulfonylmethane (MSM) is also an anti-inflammatory and slows the worsening of arthritis. It is better than many mainstream pain medications that contain aspirin due to it having fewer side effects.

There is a significant amount of research being conducted on the value of anti-oxidants in both humans and dogs. These are found in Omega 3 and Omega 6 fatty acids, DHA, and Vitamin E. There appears to be a benefit to treating arthritis, and secondary benefits such as improved memory in older dogs.

Recent discoveries in fatty acid nutrition have provided clear evidence that osteoarthritis in dogs (OA) may be very responsive to dietary additions of specific fatty acids.

Therapeutic foods such as Canine Prescription Diet j/d, which is designed for companion animals with OA, supply age-appropriate nutrition and specific nutrients that may help reduce inflammation and pain, provide the building blocks for cartilage repair, slow the degradative process, compliment prescribed medications, and provide tangible improvement in symptoms of OA.

A 75 lb (34.1 kg) 6-year-old female neutered Labrador retriever–mix dog was checked for lameness in the rear, two years duration, caused by degenerative joint disease (DJD) and hip dysplasia. The owner indicated that the dog had moderate to mild trouble getting up after resting, stiffness, limping, and reluctance to play, run or jump.

The patient was placed on Prescription Diet Canine j/d and leashed walks were encouraged. NSAIDs were to be added if significant improvement was not seen in a couple of months. Improvements in clinical signs were seen by the owner within 45 days and the veterinarian noticed less pain when palpating the left hip joint after 90 days of nutritional management. The dog had not lost weight over this period of time and reaching optimal body weight and condition would be expected to further improve the clinical condition. No medications or supplements were necessary to control the clinical signs at this point and continued monitoring was recommended.

The first step in helping a dog with osteoarthritis is weight reduction to normal levels. Most arthritis patients are overweight and could benefit from dietary management, This combined with exercise can in some dogs eliminate the signs of osteoarthritis. 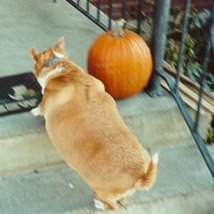 There are several surgical procedures available for treating arthritis in dogs including:

Often you need to choose more than one dog arthritis medication. Here is a brochure on the multiple remedies available:

For more information on dog arthritis home remedies and medicine: