What You Need to Know about Bronchitis in Dogs

What is Bronchitis in Dogs?

Bronchitis in dogs refers to inflammation of the airways or bronchi (Singular: Bronchus) which supply air to the lungs from the trachea. Each bronchus of the lung divides into smaller extensions, which are called bronchioles. Most dogs with the disease are bright and alert.

Canine bronchitis can be acute or chronic in nature, which is characterized by persistent cough, wheezing and gagging. Diagnosis is based upon clinical examination, symptoms and chest X-Rays. An additional laboratory culturing of mucous might be needed in complicated cases. The condition is seen more frequently in smaller or toy dogs breeds and in larger dogs. Cocker Spaniels are also more prone to the condition.

The treatment goal is to control any clinical signs, support the dog's quality of life and prevent any disease progression. Treatment is accomplished with the administration of broad spectrum anti bacterial agents and cough depressants. Hygienic measures, warmth and rest is compulsory for early recovery and to reduce the chance of complications, since the lungs can become prone to acute infections.

When a dog repeatedly coughs it is a sign of a lower airway disease. Bronchitis has two forms, acute and chronic. Both forms are characterized by symptoms such as a hacking, dry, non-productive cough, and gagging that you might think is vomiting but it is not. Bronchitis does not usually have other symptoms such as a loss of appetite, lethargy (tiredness), depression, and fever.

Coughing occurs at any time of the day and is more common when during exertion such as when exercising, or at night (nocturnal coughing) as secretions in the respiratory tract accumulate. It can also occur when the trachea becomes irritated such as during leash pulling.

Other symptoms include breathing that looks like an abdominal push (increased effort to breath when resting), exercise intolerance, skin that has a bluish appearance (cyanosis), or temporary loss of consciousness (syncope).

Bronchitis is considered to be a common issue, which in mile forms can be   caused by allergens, dust, environmental allergens and cold. But, in some cases, it can turn into a complicated health issue, like cases of bronchitis in dogs caused by secondary infections to those caused by pneumonia and pneumonia and tracheo-bronchitis (Kennel Cough).

Young and old dogs are more susceptible to canine bronchitis, since they have relatively weakened immunity. On the other hand, dogs which are exposed to environmental stress, chemical fumes and owners that smoke most of time, gets their bronchi frequently inflamed. 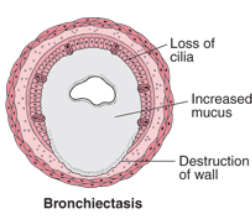 Chronic bronchitis (CCB) occurs when a dog cough lasts more than 2 months when cardiorespiratory disease or another cause such as neoplasia is not present. Symptoms include:

Irritation of the airway can have multiple causes including:

It is relatively impossible to identify canine bronchitis through symptoms alone, as most respiratory problems have almost the same signs and symptoms. Dogs with bronchitis exhibit signs such as a persistent cough, which produces a spasm that gets worse if the environment is changed or if a dog is put on rest. It is noted that in most of the dogs with only bronchitis, cough symptoms are more severe at the beginning of any exercise, even if it does not involve excessive running or jumping.

Other signs of canine bronchitis include wheezing and gagging. In mild cases, respiratory sounds remain normal. In terms of generalized signs, anorexia (loss of appetite) and mild fever may occur, but if the condition is severe or chronic, severe fever and respiratory signs such as cough, wheezing, gagging and stress are noted.

Clinical history, symptoms and examination can only confirm the immediate status of respiratory problem. Confirmation of the exact condition can never be identified with routine clinical procedures. In order to confirm the presence of bronchitis, chest X-Rays are considered to be the most effective tool, along with laboratory examination of respiratory mucous.

In cases of bacterial or viral infections, blood work might also be needed. To carry on with an effective and safe treatment, other respiratory problems such as pneumonia, tracheo-bronchitis etc should be carefully eliminated. Advanced diagnostic techniques such as bronchoscopy, in vitro assay of mucosal swab and bronchial washing can help to confirm any chronic and/or complicated condition related to simple dog bronchitis.

The veterinarian will listen for lung sounds, crackles when taking in air, and the increased effort when quiet to produce a cough, and wheezing. When releasing air the Vet may also hear a "snap" that occurs when there is decreased cartilage rigidity due to the increased intrathoracic pressure generated with an active breathing effort. The snap occurs when the airway walls "snap" together.

The Veterinarian will also want to check for heart disease to make sure that this isn't the cause of the condition. This is difficult in older dogs that may have a heart condition such as a murmur. In this case the  Doctor will check other signs such as the heart rate. 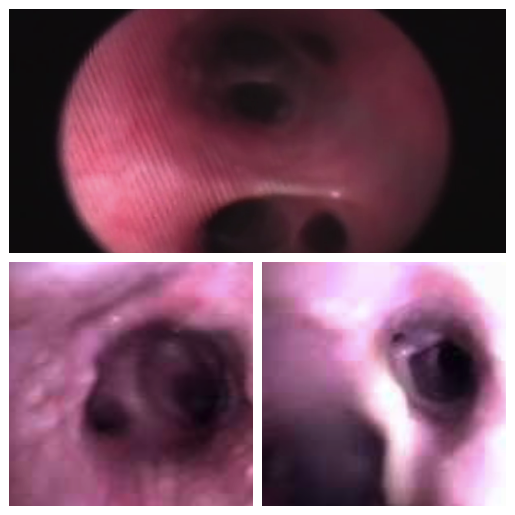 Diagnostic Tests for Bronchitis in Dogs

There is no bronchitis cure, so the treatment plan targets keeping the disease from getting worse, reducing inflammation, and elimination of any cough.

Overall, treatment is directed at eliminating any trigger and suppressing inflammation with inhalers or steroids. Dog cough is the primary symptom that requires control. It can be done effectively with anti-tussives, that preferably contain codeine.

If canine bronchitis is a secondary viral or bacterial infection, broad spectrum anti microbial therapy is needed, which should only be done with a prescription from a veterinarian after sensitivity tests are complete to make sure the dog can tolerate medication prescribed.

If a dog is obese, weight loss is recommended. If environmental, consider an air filter for the home, eliminate aerosols, and keep cigarette smoke away from your dog.

Natural remedies such as KCDefense or Amazpet may provide some systemic support, but should only be used in consultation with a veterinarian.

Hygienic improvement, warmth and rest with specific and supportive therapies can lead to a timely recovery and to prevent any other respiratory complications.

How do you treat bronchitis in dogs?

Treatment is aimed at removing any triggers that can be identified such as allergens or environmental factors, suppressing inflammation in the lungs with steroids, and cough suppressants. Antibiotics are rarely indicated as bacteria is usually not present.

What causes bronchitis in dogs?

How long does bronchitis in dogs last?

The length of the disease depends on the underlying cause. Cough suppressants should bring some immediate relief. If your dog has chronic Bronchitis (CB) the prognosis is poor.. The goal of management is to reduce clinical signs and slow disease progression. Early intervention can prevent or delay the onset of potentially life-threatening issues and irreversible structural changes.

Have A Dog Cough Related Question For Our Editors or A Story to Tell About This Topic?

Do you have a Dog Cough Health Question for our Editors or a Helpful Story to Share? Please include information such as age, sex, breed, medical history.