"A dog diabetes high protein diet combined with proper levels of exercise, prescribed medications and nutritional supplements can be an effective way to control canine diabetes.

It is best to work closely with your veterinarian and nutritionist to benefit from the latest thinking on the subject combined with an understanding of your dog. For example, recent research has indicated that a diet based on sorghum resulted in a lower post-meal glucose response than a diet based on rice.

The goal is to find the perfect balance between dietary ingredients, medications and exercise. Any changes in diet will change this balance, which is why veterinarian input is critical. Beyond the science, a diet should also be formulated to that your dog eats what is provided."

The types or source of calories consumed can have a large impact on the glycemic response of dogs. Dogs that are thinner and more muscular (lean) tend to have internal systems that are more active (called having a more active metabolism).

After a meal, blood glucose surges appear to be regulated by multiple factors in the diet such as the chemical makeup of carbohydrates,the type of dog diabetes high protein diet selected, fat, dietary fiber, and the type of food processing used.

A high quality, high protein diet is essential to managing and maintaining optimal body weight for dogs with diabetes. These types of diets contain a balance of amino acids that are highly digestible. 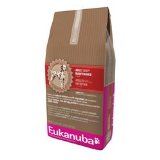 Carbohydrates provide an excellent source of energy for dogs. Different types of carbohydrates have different impacts on metabolism.

Dietary fiber is another form of carbohydrate, but is fermented by bacteria in the colon instead of being digested in an intestine. Complex carbohydrates are the largest source in dog foods and affect glucose metabolism the most.

Insulin, Food Intake, and the Effect on Glucose Levels

After dietary starch is digested, the resulting glucose is readily absorbed from the small intestine, and circulates in the bloodstream to provide tissues with needed fuel. The rate of starch digestion and absorption is directly responsible for the rise in blood glucose immediately following meal.

Choosing the appropriate source of starch will have a substantial effect on a dog's blood sugar status. Insulin is a hormone secreted by the pancreas in response to elevated blood levels of glucose. The size of the insulin response is directly proportional to the level of glucose present in the bloodstream.

More glucose present in the blood will result in greater levels of insulin being released. Insulin promotes the efficient storage and use of glucose molecules by controlling their transport across cell membranes, permitting cellular uptake and metabolism of glucose.

A dog's post-meal insulin level is strongly influenced by digestion and absorption of the starch contained in its diet. Recent studies show that it is not true that complex carbohydrates (starches) result in lower glucose surges after digestion.

The dietary levels of carbohydrates and its effect on glycemic response have been used to explain approximately 90% of the reason for differences in glucose and insulin responses to a meal in humans. Similar studies have not been done on dogs although the response is expected to be the same.

The Iams Company designed a study to evaluate the blood sugar response of diets containing varying starch sources as a chief source of energy in 30 weight stable, clinically normal, adult dogs. Dogs were randomized to five different diets: corn, wheat, barley, rice, and sorghum. The experimental diets were processed similarly (32% protein, 10% fat, 30% starch) with each starch source consisting of whole grain without the hull. The five experimental diets were formulated to have a similar starch content so that blood sugar response was not influenced by differences in carbohydrate intake.

Supplementation of micro nutrients was held constant among diets since certain vitamins and minerals have been shown to alter signs of glycemic status. Dogs were fed their respective diets to maintain body weight for two weeks, followed by a blood sugar response test.

The rice diet resulted in higher glucose levels from 20 to 180 minutes after eating and also the greatest average glucose after meal peak (Figure 3). The sorghum diet had consistently lower after-meal plasma glucose levels than the other diets between 20 and 60 minutes and the glucose levels gradually increased for the remainder of the time points.

The sorghum diet also resulted in the lowest average glucose levels. The glucose response to corn, wheat, and barley were intermediate to sorghum and rice with corn tending to yield the lowest glucose response of the three diets. The rice diet had a significant increase in blood insulin levels at 45- and 60-minute time points over all other experimental diets. The rice diet also resulted in a higher average insulin level, and insulin peak.

There is a great deal of evidence to indicate that the use of carefully chosen herbal and dietary supplements can offer support to help both prevent diabetes and to keep it under control in dogs who have already developed it.

Dietary supplements can reduce or eliminate the need for prescription medication and can also aid in preventing some of the tissue and organ damage associated with uncontrolled blood sugar levels. Herbs to look for include:

A good commercial source for research and to purchase supplements is GlucoEnsure.

As mentioned, work with your veterinarian to find the proper balance of nutrition, medications, supplements and exercise. Medications such as insulin will need to be adjusted depending on the diet you select for your dog. Last, work toward a diet that achieves the desired medical outcome as well as something your dog looks forward to each day.

Have A Dog Diabetes Question For Our Editors?

Do you have a canine diabetes question for our editors or a helpful Story to Share? Please include information such as medical history (describe visits to vet and any diagnosis/test results), age, sex, breed, diet, medications your dog is taking, recent changes in behavior (lethargy, appetite), etc.

Just fill out the form below. There is no charge for this service.

If you do require an immediate response we suggest using this online dog veterinary service that is available 24 hours a day. You decide how much to pay the Vet answering your question and you only pay when satisfied with the answer.

What Other Visitors Have Said

Diabetic Dog Proper Nutrition Not rated yet
Reader Question : What is the best diet for a diabetic dog? My 6 year old Maltese became diabetic a couple of years ago. He gets 2 insulin shots per …