What You Need to Know:

Ticks are small gray dots that appear on a dog's skin. There are several tick species that cause problems in dogs, with the Deer tick best known because of its relationship to spreading Lyme disease. Ticks are found in moist, dark parts of the body such as between the toes, ears, eyes, neck, armpits, hind legs, and at the tail base.

There are 6 major types of infections associated with ticks the most common being Lyme disease. Lyme disease is caused by the bacteria Borrelia burgdorferi and is primarily caused by Deer ticks and Black-legged ticks. Not all ticks carry Lyme disease and only 5% to 10% of exposed dogs show any symptoms. Problems usually occur from May through August, but can happen on any day that is above the freezing mark. New tests (Lyme Multiplex Assay) can detect the disease in 3 weeks after exposure as opposed to older tests which took 4 to 6 weeks.

As ticks take the dog's blood they become enlarged, making them easier to spot on the skin. Dogs do not get the bull's eye rash seen on human skin. Symptoms of Lyme disease in dogs can include swollen joints and lymph nodes, a dog demonstrating lameness, or shifting from leg to leg. A dog may have a fever, experience appetite loss, or will act lethargic. In chronic cases, kidney failure can develop, a condition that may be fatal. Diagnosis is initially via a physical examination and then confirmed by a blood test.

Treatment involves removing the tick as quickly as possible since studies suggest that for most infection types, the time to infection on average is 24 to 48 hours (see table below) depending on the type of tick. Treatment involves the use of an antibiotic called doxycycline, which is prescribed for an entire month.

Dogs can be protected via the use of a spot-on or collar. 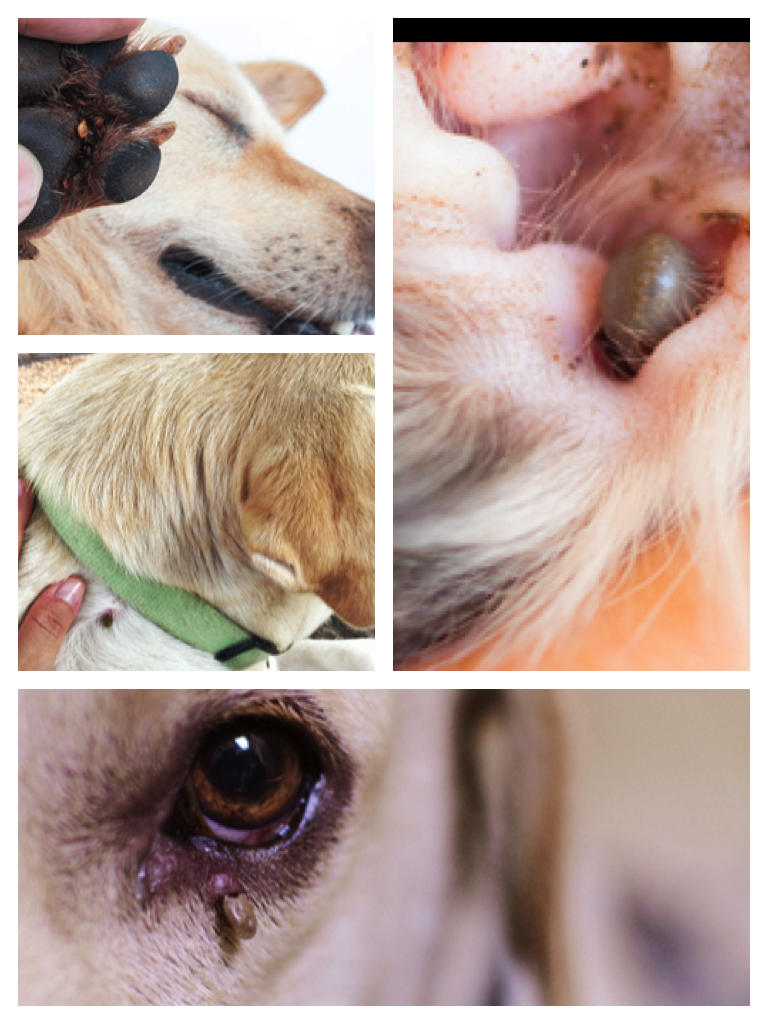 If a tick is removed from a dog before 24 hours there is little to no risk of infection.  Infection can spread when the tick starts feeding between 24 and 48 hours. For this reason, it is important to continually check your dog and remove ticks immediately.

Rickettsia is a disease spread by ticks throughout the world. There are several bacterial species and more than one can infect your dog at one time.

Rickettsia symptoms indicated a dog is sick include:

Other symptoms that are less common include:

Note: a dog owner can contract Rickettsia and will have similar symptoms

Diagnosis is confirmed with an antibody assay blood test or blood smear.

Rocky Mountain Spotted Fever is a type of rickettsia spread by ticks. This disease causes the symptoms listed above plus:

A variety of ticks can cause Babesiosis. The parasite causes anemia by attaching to red blood cells. It is spread from infected ticks or from an infected dog that bites your dog.

Symptoms of Babesiosis in dogs include:

A healthy dog's immune system should be able to fight Babesiosis without medications. Dogs that had their spleens removed are at the highest risk.

Diagnosis is via a blood smear or blood test.

Treatment depends on the type of bacteria detected but can include the medications azithromycin or imidocarb.

If the veterinarian can find a tick on a pet's skin, he will determine the exact species by sending it to a lab. A PCR test can detect any pathogens in the tick.\

In addition to the above, the veterinarian will do a physical examination, review symptoms, and do a blood test to confirm any preliminary diagnosis. A veterinarian may choose to treat the suspected cause with antibiotics prior to confirming the diagnosis with a blood test.

Several types of ticks attach to dogs, carry disease and transmit diseases to dogs. These include:

The Lone Star Tick is found in the South, Midwest, and Eastern United States in areas where you find white-tailed deer. This tick can transmit several types of bacteria to dogs such as ehrlichiosis (canine monocytotropic ehrlichiosis), a bacterial disease that causes enlarged lymph nodes, bleeding, vomiting, and lethargy.

Unexposed ticks must feed on a dog with the disease to become infected and then perpetuate the disease. Clinical symptoms in dogs are rare. Most symptoms are due to immune system reactions to the organism.

Treatment involves supportive care using antibiotics such as doxycycline or tetracycline. Doxycycline is provided for at least 28 days. It is unknown if ehrlichial infections are cleared by treatment. Antibody tests (titers) usually become negative after 1 year in therapy.

The deer tick is found in the Northern Midwest, East, and Southeast Canada. It can cause several diseases in dogs, the best known being Lyme Disease. Blood tests can detect exposure but do not prove the presence of illness. Tests can stay positive for months or years after treatment.

Dogs that test positive and that have clinical signs of disease are generally treated with doxycycline (10 mg/kg q24h for 1 month). Some dogs might need to be treated for a longer period of time as well as receive a special diet if there are any signs of kidney disease.

The Lyme Disease vaccine is controversial and is not generally administered by Veterinarians. 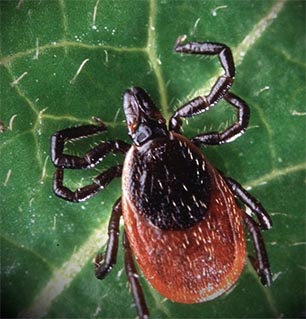 Brown Dog Ticks are larger than Black-legged deer ticks. That said, Tick Bites from Deer Ticks are Considered to be More Dangerous.

The Brown dog tick is named for its' color. These ticks live indoors and infest dogs kennels and usually do not bite pet owners. It is found anywhere in the world in warmer climates.

The tick has the following characteristics:

Follow the instructions below to remove a brown dog tick.

How to Remove a Tick From a Dog

Removing ticks from dogs should be done within 24 hours to prevent the spread of bacterial or parasite infection from the tick to the dog. The best way to remove a tick from a dog is to follow these easy steps. Even if the tick is attached longer, the odds of infection are small.

Veterinarian Dr. Jones shows you how to remove ticks from a dog.

What You Will Need

If the head is buried deep into the skin, it may not come off when you pull. If you can't easily remove it, leave it in place. A small red bump may form over it which will go away in 2 to 3 days. Place the tick into a clear container. 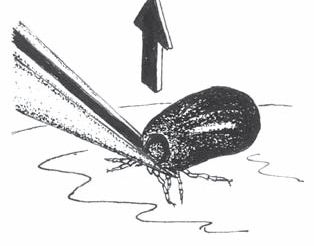 3. Clean the Area where the tick was removed with the ointment or hydrogen peroxide. Keep an eye on the area to ensure that it doesn't become infected.

Do not use tick folk remedies such as using hydrogen peroxide alone for tick removal, nail polish or Vaseline (petroleum jelly), or using heat to make the tick detach from the skin. Always remove a tick as soon as possible.

If your dog is outdoors and is covered with multiple ticks, consider using a Preventic collar. It will kill and detach ticks as well as sterilizes fleas and kills flea eggs for three months. Effective within 24 hours and continues to actively kill for three months as long as the collar is worn. The only problem is that you'll have to continually clean your dog's bedding and vacuum the area to ensure that the dead ticks are picked up.

With the collar, you may also want the added protection of a spray such as Frontline Spray or a shampoo designed to kill and repel ticks. Products can be used in combination, however, you should check the labels to make sure each is compatible with the other.

As an alternative to remove ticks dog, you can buy a dip. A dip is messy to use and creates toxic fumes. You can purchase one to use at home or have this done at your veterinarian's office.

If your dog only stays around your property, then the key to tick prevention is to remove tick food, which is small and large mammals. This includes everything from deer (which is why they are called deer ticks) to small mammals such as mice. While fences can be used to keep deer away, mice are a bit trickier. One humane and safe approach is to buy a product called Eco Health Damminix Lyme Control Packs. These packets are placed around your backyard and attract mice. The mice then bring them back to their nests as building material. Each packet contains a poison that only kills the ticks, not the mice.

You can also help prevent ticks by keeping your yard free of tall weeds, grass, and debris where ticks might hide. Ticks prefer being on higher ground to make it easier to jump onto a host. It is harder for a tick to jump on your dog if the grass is cut low to the ground, plus they prefer to stay out of this type of area in favor of wooded areas.

You can also protect your dog before she goes outside. This can be accomplished with products such as Frontline Plus and other tick control products that contain ingredients such as pyrethrins, permethrin, or D-limonene.  See the Companion Animal Parasite Council product list of tick preventatives for reference and ingredients.

The Companion Animal Parasite Council recommends that all dogs be treated year-round for tick and flea control. Ask your Veterinarian what product to use in your area as there may be some resistance to widely used products and if there is a specific tick season.

Have A Dog Parasite Question For Our Vet? We'll Answer It For Free!

Do you have a Dog Parasite related Question for our Veterinarian or a Helpful Story to Share? Please include information such as dog age, sex, breed, medical history, medications your dog is taking, recent changes in behavior, outdoor/indoor lifesytle, behavior etc. Pictures are also helpful in identifying the severity and cause of any parasite related problems.

We will do our best to get back to you quickly (depends on how many questions we receive each day). If you do require an immediate response we suggest using this online dog veterinary service that is available now for a small fee.