Care and Treatment of Pyoderma in Dogs

"Pyoderma in dogs is the most common type of canine skin disorders. The condition is characterized by dog pimples, lumps, bumps and areas of skin redness. It can be found in specific areas or all over the dog's body. Pyoderma usually occurs as the result of another underlying condition such as a depressed immune system, reducing the body's ability to fight off infection. Depending on the severity of the condition (surface or deep into the skin), treatment in most cases will include the combination of antibiotics and shampoo therapy. If the condition does not respond to treatment, a veterinarian will either refer the case to a veterinary dermatologist, increase the dosage of antibiotics, choose a different antibiotic, search for another cause or introduce additional therapy in whirlpools or baths."

Overview of Pyoderma in Dogs

The most commonly diagnosed infectious skin disease is pyoderma in dogs, which means pus in the skin. In overall diagnoses, canine pyoderma is second only to flea allergy dermatitis in frequency. The problem is seen more often in dogs than any other animal on the planet! 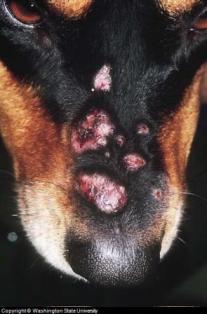 Pyoderma is the only primary skin infection in dogs. Most skin infections are secondary, which means that it is caused by another condition. For example, itching and scratching can result from some other condition, which causes the dog to open the skin to bacteria. Since the itching caused the skin to open, the bacteria is referred to as being secondary. In the case of pyoderma, the infection can start on its own. The bacteria is introduced to the skin through a dogs normal licking and grooming behaviors.

Dog’s suffering from pyoderma often have some other underlying condition that makes the dog more susceptible to the condition including:

When a puppy is weaning, several breeds are predisposed to pyoderma, with higher than average instances in Gordon Setters, Golden Retrievers and Dachshunds.  Puppy pyoderma symptoms includes anorexia (failure to eat, loss of appetite), lymphadenopathy in the lymph nods and fever. Abscesses can also form, which are referred to as puppy strangles.

Strangles and Pustules on Puppy with Juvenile Pyoderma 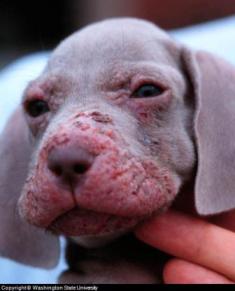 Pus filled dog skin pimples, bumps or lumps tend to appear on the dog’s groin, armpit, between the toes, at the stifle joint (where leg bends/knee), elbow and at the hocks (ankle joint). Other symptoms includes bulls eye lesions, scabs, skin flakes and dog skin redness. 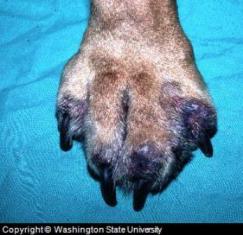 The condition can be seen in a specific or localized area, or all over the dog’s body.

Part of the canine pyoderma diagnostic process will be to determine if the patient has any predisposing factors that allowed the pyoderma to take hold. A normally functioning immune system should be able to fight off bacterial infection, which is why a vet will look for anything that is disrupting this normal protective function of the body.

The veterinarian will review the patients history and will not any clinical features during an examination. The vet will look to see if the only symptom is pyoderma or are there other potential problems. If the dog is suffering from itch (pruritus), a determination will be made if the itch is due to any underlying condition.

Pyoderma in dogs has different classifications including: 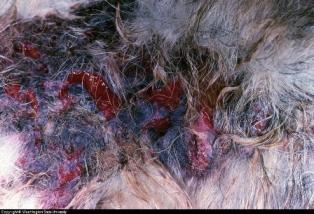 Treatment of Pyoderma in Dogs

Most cases of canine pyoderma can be managed with antibiotics 1x of 2x per day (erythromycin, lincomycin, oxacillin, cephalexin, enrofloxacin, marbofloxacin, cefpodoxime, cefadroxil, ormetroprim-potentiated sulfonamides). Antibiotics will be continued for 1 week past the point that the condition clears which is a minimum of 3 weeks to 6 weeks. The dosage will be based on the pyoderma classification.

For cases of deep pyoderma in dogs, hair should be clipped and the patient should  receive antibacterial soaks or bathing in a whirlpools (preferred). Bath or whirlpool Water should be warm and contain an antibacterial. This can be providone-iodine or chlorhexidine. If in a hospital, dog’s benefit from 1x per day or 2x per day soaking for 15 to 30 minutes. Dogs should improve in 2 to 3 weeks.

If no improvement is seen, additional investigation is needed.. Other possible explanations are selection of the wrong antibiotic, an antibiotic dosage that was too low, or a wrong diagnosis. Dogs with recurrent pyoderma, meaning the condition returns after clearing, should be referred to a veterinary dermatologist.  See our guide to dog skin pimples for additional causes.

Have A Question about Your Dog's Skin Condition? Our Vet Will Answer It for Free!

Our editors will pick 1 question to answer each week. Please include your dog's age, breed, medical history, medications and if possible, a picture of the condition.