"Whelping pups is something that will be completely handled by the mother with little assistance from the owner. It requires a whelping box for the mom and her pups. After birth the pups will immediately start nursing. There are 3 whelping stages."

When preparing for whelping pups, you need to prepare a space for the mother to give birth. Ideally the location should be easily accessible, but away from foot traffic and children.

A whelping box can be made of plywood or sturdy cardboard cartons. The box should be large enough for the mother to move around in. The sides should be high enough to prevent drafts, and the front should be cut away so that she can enter and exit the box easily. Some whelping boxes have a rail to prevent the mother from rolling on top of the pups. Line the box with several layers of newspaper, and place an old blanket in one corner. The box should be placed in an out-of-the-way location where it will be quiet and calm. Prepare the box about two weeks before she is due to whelp, and allow her time to get used to the box.

The process for Whelping pups begins when your dog starts to have contractions. This stage can last anywhere from 3 hours to 24 hours. During the contractions your dog is naturally moving around the fetuses and getting the first one in position to move down the birth canal.

Signs that your dog is preparing to whelp include restlessness, a lack of appetite, digging in her whelping box (nesting), panting, moaning and a lack of interest in any humans that are nearby. Her body temperature will also drop a couple of degrees, from 101 or 102 degrees to about 99 degrees, although this does not happen in all dogs.

The mother may lie on her side or she may squat as if she is going to urinate. The membrane that encases the fetus will move into the cervix which in turn opens the passage for the pups.

When the first puppy is ready to be born and enters the pelvis, contractions accelerate in frequency. You will see clear fluid come from her vagina before a puppy is born. This acts as a lubricant. Then you'll see the amniotic sac or water bag at the entrance to the vagina. The water bag makes the birth canal larger allowing the puppy to pass through.

When cleaning the puppy you might encounter the umbilical cord. If your dog is removing the membrane she will just bite it off. Hold the umbilical cord closed for 15 seconds about 1/2 inch from the pups abdomen. You can cut it with a scissor at that point. If it bleeds hold the cord for 30 seconds to stop the bleeding. The mom or "bitch" may cause the cord to bleed if she bites too close. Just pinch the cord for 30 seconds and the bleeding should stop.

If the puppy appears stuck for at least 20 minutes call your veterinarian for advice. Never pull on a pup since it might hurt the mom or pup.

It can take anywhere from 10 minutes to two hours between puppies. If there are 12 or more puppies your dog could take a break of several hours before continuing the birthing process. It could take a long time between puppies and your dog may need to go outside to relieve herself. If so, take a towel with you (and a flashlight, if it is dark out) in case a puppy is born outside. You should know how many puppies to expect, because your vet will do x-rays during the pregnancy to determine the number of fetuses. If more than two hours go by with no puppy, contact your vet.

If your dog ignores the puppy, partially clean the pup with a towel and introduce the pup to your dog's teat.

Once the pup starts to drink, the mom will realize what to do. During the cleaning process you might encounter the umbilical cord. Tie a thread around the cord approximately an inch away from the puppy. Cut the cord itself another inch away from where you tied the thread. Do not pull on the cord.

Membranes from the placenta are expelled within 15 minutes of the birth of each puppy. It is important to count the number of placentas and match that to the number of puppies born. Once all the puppies are born, clean up the whelping box, then put the puppies in the box with their mother. They should begin nursing right away. Keep a close eye on them for the next several days to make sure they are all nursing and their little bellies look full.

If your dog needs a cesarean section, your veterinarian will make a incision in the belly. The pups will be removed through the opening. Today cesarean's are done on an emergency basis and could be routine for some breeds. Discuss this with your veterinarian before one is needed.

Your dog and pups will be able to go home within 2 hours of having the procedure since the best place is home. 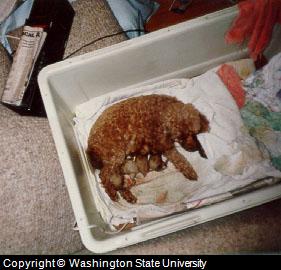 Pups will need behind area stimulated and cleaned and stimulated after eating. If it isn't urine and feces could be backed up inside the pup. The mom should naturally do this. If she does not introduce her to the back of her pup and then she should take over.

Do not rush the mom or "bitch" to eat or urinate after birth. Your dog will go in its own time. After several weeks she will start becoming comfortable separating from the pups. Make sure there is enough food and possibly milk available since she may want to eat more to support her pups.

You'll see the pups open their eyes at about 2 weeks of age. Feeding food supplements start around 3 weeks.

From Whelping Pups to More on Dog Pregnancy