What You Need to Know | Video

Ask a Question, Learn, and Advice From Our Vet

What You Need to Know About Breast Cancer in Dogs:

"Canine breast cancer is also referred to as neoplastic malignant mammary gland tumors (MGT), which means that the tumors are cancerous and growing uncontrollably. Mammary tumors in dogs are among the most common type of tumor found in intact (unspayed) female dogs (found in 1 in 4 dogs). The average age dog is between 10 and 11 years old when diagnosed. It is most often found in the 4th and 5th set of glands.  Tumors can be soft or firm, have different sizes, can be covered with skin or start to ulcerate. Most dogs are diagnosed during a clinical examination and have no other symptoms. If the cancer has spread then a dog might be feeling ill.

Approximately 50% - 71% of canine mammary tumors are cancerous, with the other 50% being considered benign or not life threatening. A dog's prognosis (expected life expectancy or survival rate) is based on the nature of the tumor including the tumor size, whether the cancer has spread to nearby lymph nodes and other areas of the body (metastasis), how deep the tumor is into the tissue, and the presence of estrogen receptors (estrogen receptors in cells can change cell behavior). If tumors are tested and diagnosed early, and can be successfully removed with surgery, the prognosis is excellent. There is a risk of  recurrence of the original tumor in dogs that have invasive or large tumors or if the problem has spread to lymph nodes or other areas of the body. A veterinarian may recommend other therapies along with surgery including chemotherapy."

Canine Breast Cancer is the most common type of cancer in female dogs. Female dogs have five pairs of mammary glands with the possibility of tumors forming in any one of the glands. Breast cancer can spread from one gland to another. Spaying a female dog dramatically reduces the odds of getting breast cancer if done early in the dog’s life.

Canine breast cancer represents 52% of tumors found in female dogs and have a higher incidence or occurrence in dogs that are between the age of 10 and 11. Half of the dogs with mammary gland tumors will have multiple tumors. Most dogs with a tumor will see the cancer spread to the lungs in 1 to 2 years.

Video review of the causes, diagnosis and treatment of canine breast cancer.

Breeds With A Higher Incidence of Breast Cancer or Mammary Cancer 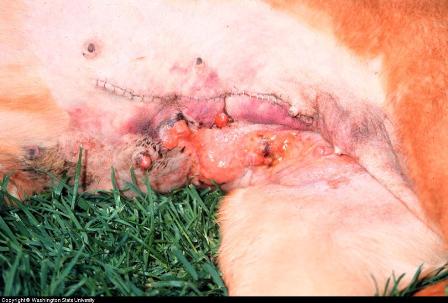 Inflammatory Mammary Carcinoma in a Dog 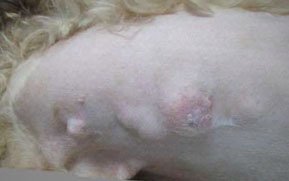 Dog breast cancer symptoms or signs include slow growing multiple or single masses at a nipple. About half of patients have more than one mass. Masses may be ulcerated, movable and fixed to body wall or skin.

Your veterinarian will look for visible signs of canine breast cancer or mammary cancer tumors. Signs can include swelling, or soft or hard lumps near the mammary glands. If tumors are not visible, diagnosis is made when other symptoms are investigated and a tumor is found to be the cause. Owners can role their hand down the chest of the abdomen feeling for any lumps and bumps, rolling the tissue between the fingers. Look for any hardness in the vicinity of the nipple.

A Fine Needle Aspiration (FSA) test or biopsy is used to take a tissue sample for testing prior to the recommendation of surgery. Though rare, a tumor may look like cancer when in fact it is a benign cyst. The FSA test will allow for a definitive diagnosis.

Other necessary tests include a CBC, chemistry profile, urinalysis and 3-view thoracic X-Rays, which help the veterinary oncologist check if the disease has spread.

A veterinarian will not need rule out several other causes before a diagnosis of dog breast cancer is made:

Treatment of Mammary Cancer in Dogs

Surgery is the most common form of treatment for breast cancer that has not spread (lumpectomy, mammectomy, mastectomy). Localized cases use surgery as a complete cure, the case if the tumor is small and the margins or the tumor are easily identified and removed. Chemotherapy is used in more advanced cases. Surgery is recommended in cases where the cancer has spread to the lymph node. 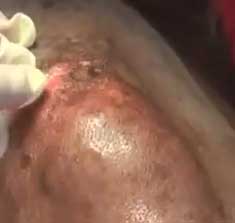 Consult with your veterinarian if you see any lumps near the mammary glands. It is possible that tumors are benign (non cancerous). If this is the case, most veterinarians will remove the tumor and then send to a lab for a definitive evaluation.

In addition to surgery, your veterinarian may recommend chemotherapy treatment to make sure that malignant cells (cancer cells that spread quickly) do not spread to the lungs. Chemotherapy drugs such as Adriamycin and oral Cytoxan are used. Recently other drugs such as mitoxantron (Novantrone™) and Adriamycin or Carboplatin (if other drugs are proving to be ineffective) have been used. One study shows that the 2-year survival rate for8 dogs treated with surgery alone was 29% while the survival rate for 8 dogs treated with the chemotherapy medications adjuvant 5-fluouracil and cyclophosphamide was 100%.

Chemotherapy usually lasts for a span of 6 months with the number of treatments defendant on the severity of the disease (possibly 4 to 6 per week).

Another approach to possibly extend an intact female dogs life with canine breast cancer is not not only have the malignant tumor removed surgically, but to undergo an Ovariohysterectomy (OHE). Recent studies have shown that the benefit could result in a 45% increase in the length of survival after treatment.

Other approaches that are dependent on tumor type and that should be discussed with your veterinarian include Radiation Therapy, Estrogen Therapy and the use of Cox-2 Inhibitors.

Hormonal therapy may help unspayed dogs who have an adenocarcinoma or carcinoma.  According to Veterinarian's at the University of Pennsylvania, dogs that were spayed "at the same time or within two years prior to the tumor surgery lived significantly longer than dogs that remained unspayed after their tumors were removed."

Supplements are not a cure, but can be used as a supportive measure to speed healing, strengthen healthy cells and to reduce the severity of symptoms. They are not a specific treatment, but work to strengthen the body's natural defenses. Supplements used in breast cancer cases include Inositol hexaphosphate and 1-3-beta glucan.

Natural remedies such as C-Caps may be of some help as a supportive therapy during and after treatment. If your dog is undergoing chemotherapy or radiation do not use any supplements unless advised by your veterinarian or veterinary oncologist.  In this case they are best used during the recovery phase after chemotherapy is completed.

For dogs with large breast tumors (> 3.0 cm), the prognosis tends to be poor since there is an 80% chance of recurrence of the tumor within 6 months after canine breast cancer treatment. The survival rate of dogs with what is termed gross metastasis or widespread spreading of cancer is 5 months. The overall rate of 2 year survival is between 75% and 90%.

Diet for Dog With Mammary Cancer

Dog's that eat a high fat diet or are obese see an increased risk for tumor growth. From a diet perspective do not over feed your dog.

Aftercare of Mammary Tumours in Dogs

Dogs are released from the hospital 1 to 5 days after surgery. They will have to return to have the surgical site examined and any staples or sutures removed (if necessary). Medications are provided via prescription to manage any related pain along with antibiotics to avoid infection.

Dogs will need to wear an Elizabethan collar for about 2 weeks to prevent any scratching of the surgical area. Activity is often restricted for he same period of time. A pet parent may need to change any bandages.

Dogs will need to be checked every 3 months for 1 year after surgery to make sure that the cancer did not return. It is a common practice to take X-Rays and/or an ultrasound every 3 to 6 months.

Several factors will impact the post-surgical dog breast cancer survival rate. Dogs with localized disease that are discovered early can be cured.

Even if the tumor is benign, it is possible that new tumors can be both malignant and benign.  In general, small tumors when surgically removed (3 - 5 cm or less) have a better dog breast cancer life expectancy as it has a lower chance of recurrence or spread. If the tumor is completely eliminated, a dog can live for many years after surgery. The key to a good prognosis is detection and early surgical removal.

If the breast cancer has spread to the lymph nodes, in dogs with rare types of malignant tumors, mixed tumors, papillary and tubular carcinoma and carcinosarcoma and solid carcinoma had median  survival times of between 180 days and 195 days. Ask your veterinarian since survival times can be significantly higher.1

Brochures on Breast Cancer in Dogs

Canine Breast Cancer
Mammary tumors in dogs, a review of the symptoms diagnosis and treatment of these tumors.
Written by: PennVet - Ryan Hospital
Available in a free Ebook