"Due to purebred breeding practices, many bulldog health problems are now common. So much so, that this should be a major consideration for anyone considering the breed. The breed is the 6th most popular, even though many American and English bulldog health disorders exist. The flat or short faced head and other desirable traits lead to health issues that range from respiratory problems to anatomical and genetic issues that result in a relatively short lifespan.

While it is possible to have a healthy bulldog, the odds are low. This breed ranks number 2 for likelihood of death from an inherited disorder, and ranks number one for death due to respiratory disease. Future owners should absolutely buy pet health insurance since costly medical issues are common in this breed. Action is being taken by the UK Bulldog Kennel Club, which is now accepting a wider range of characteristics to give breeders greater flexibility. This is not the case in the U.S. where a more restrictive set of standards is used. Be prepared to spend between $5000 and $8000 over the lifetime of the dog, which can be offset with bulldog health insurance.

Note that many reputable breeders disagree with the assertion that the breed has medical issues, particularly if a breeder with an excellent reputation is used. Check with your breeder that the parents have been tested for several genetic health conditions as recommended by the Bulldog Club of America. These include tests for patellar luxation (kneecap problem), congenital heart disease and tracheal hypoplasia."

The purebred bulldog is known to have a range of genetic medical issues. Think twice before owning this breed or at minimum, check on the health of the parents and siblings before adopting any pup. Bulldogs used for breeding should be tested according to the recommendations of the Bulldog Club of America (BCA). This includes testing for:

Other recommended tests include checking for tracheal hypoplasia, a breathing issue that is causes by a narrow trachea.


According to the Journal of Small Animal Practice, the average bulldog has a life expectancy of 6 years. 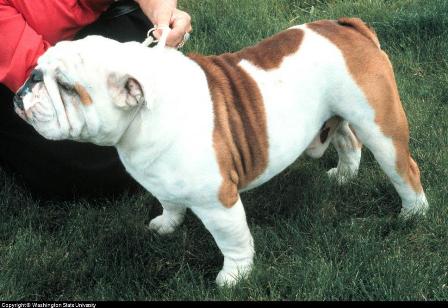 These are the many types of bulldog health concerns that every owner (or potential owner) should be aware of:

Note: If your bulldog is breathing heavily, or the breathing seems labored, be sure to visit your veterinarian for a checkup. 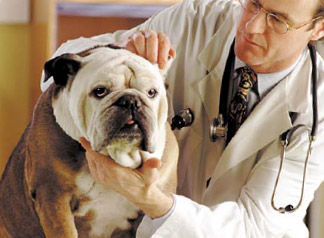 One of the many Bulldog Health Problems is an Enlarged Abdomen due to Heart Failure (CHD dilated cardiomyopathy)
Source: Washington State University

Bulldogs have difficulty eating due their unique head shape. For this reason, we recommend the Royal Canin Bulldog Dry Formula that was made specifically for this breed. The food has a unique shape that makes it easier for this breed to chew and contains ingredients which are more easily digested. 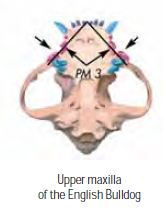 When choosing bulldog food, the physical characteristics of the kibble must be adapted to the Bulldog’s size and jaw shape
Source: Royal Canin Group

Dog insurance claims are higher for this breed based on the many bulldog health problems described above. For this reason, you may encounter higher fees when insuring this breed. To keep costs low we suggest getting quotes from several insurance companies.

When applying for bulldog health insurance, we suggest contacting the following reputable companies for a quote:

A recent genetic study at the University of Helsinki found a gene variant associated with a screw tail in Bulldogs The variant also was shown to result in caudal vertebral anomalies and shortening of the muzzle and may affect the development of the heart.  A different study at the University of California Davis linked screw tail to a variant in the DVL2 gene, which has become entrenched in English Bulldogs, French Bulldogs, and Boston Terriers due to inbreeding. The variant may also contribute to other features typical of those breeds.

The prevalence of the DVL2 variant varied greatly among breeds. All the English Bulldogs, French Bulldogs, and Boston Terriers in the study were homozygous for the variant, meaning they inherited the variant from both parents and did not carry the normal form of the gene. Bot the variant and the normal form of the gene were found in American Staffordshire Terriers, Staffordshire Bull Terriers, Dogues de Bordeaux, English Bulldogs and American Bulldogs.

To determine the effect of the variant on body shape, the researchers analyzed the skeletal anatomy of American Staffordshire Bull Terriers of different genotypes through computed tomography scans. The results showed that the DVL2 gene defect results in caudal vertebrae anomalies in a homozygous state.

Alternatives to the American and English Bulldog

Breeds that are similar to bulldogs, but that do not have the health problems are the Olde English Bulldogge and Leavitt bulldog. Note that these breeds are not recognized by the Bulldog Club of America.

Have a Bulldog Health Question for our Editors and Readers?

Do you have a comment, suggestion or question about Bulldog health? Share it! Our editors select several questions a week to answer for free. Just provide your dog's breed, age, sex and medical history.

Can the Bulldog Be Saved?
Denizet-Lewis
The New York Times Magazine