"Dog seizures can vary in cause by the age of your dog. Seizures can usually be treated with prescription and homeopathic approaches."

There are two types of canine seizures that can affect your dog's health:

1 - Primary seizures, or idiopathic epilepsy, which means that seizures occur for no known reason

2 - Secondary seizures, which are seizures that occur due to some diagnosed illness or other cause

The likely cause of the seizure is also associated with the age of your dog.

Causes of Seizures in Dogs Under 6 Months of Age

Seizures in dogs within this age bracket are most commonly due to a disease that can be diagnosed with a physical exam and blood test. 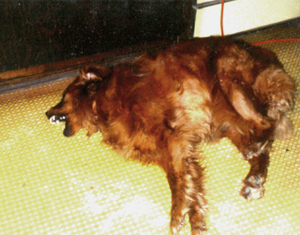 Dog seizure episodes start with the dog stiffening, and then falling. Next the body jerks. Dog seizures do not cause pain, however during a seizure a dog cannot control the bowels or bladder.

There are many conditions that can cause your dog to have seizures, including metabolic disorders, liver problems, thyroid disease, central nervous system damage, infections, and genetic disorders. Many of these can be diagnosed by blood tests. Your vet may recommend other tests as well, such as a cerebral spinal fluid test (a test of the fluid that surrounds the brain and spinal column), an EEG, an MRI, or a CT scan. If these tests do not find a cause for your pet's seizures, then your vet will probably make a diagnosis of idiopathic epilepsy.

Phenobarbitol and primidone are the most often prescribed anti-seizure medications. They may initially cause sedation and may also cause your dog to eat and drink more than usual. These side effects will probably wear off as your dog becomes accustomed to the medication.

The object of medication is to decrease the frequency and severity of seizures. It may not be possible to eliminate the seizures altogether.

Home Remedies for Dogs With Seizures

How I Treat Seizures
Anor, S.