Signs and Treatment of Salmon Poisoning in Dogs

The cause of salmon poisoning in dogs is from the ingestion of certain kinds of raw fish that contain toxic parasites. Generally, clinical signs appear within six days of a dog eating an infected fish with death occurring in 14 days. Only 10% of dogs survive if left untreated. If you suspect that are dog might have eaten raw fish that contains the parasite (see below for symptoms), contact your veterinarian immediately since this condition can cause death. 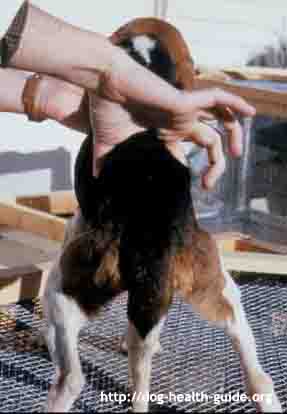 The disease is most common west of the Cascade mountain range of the Pacific Northwest (from San Francisco through Alaska).  Highest incidence is from the northern part of California to Puget Sound. The disease is also present in rivers that support migrating fish.

Salmon poisoning occurs when a dog eats certain types of raw fish such as uncooked salmon, trout, large-scale sucker, lamprey, sculpin, redside shiner, shad, sturgeon and candlefish. Salmon and other types of fish that swim upstream to breed can be infected with a parasite called Nanophyetus salmincola. The parasite is harmless but many are infected with an organism called Neorickettsia helminthoeca that is the cause of the poisoning.

After eating fish, the larva from the flue release rickettsaia, which spread via the bloodstream to vital organs and tissues. The result can be necrosis (cell death caused by degradation), hyperplasia (abnormal increase in normal cells) and hemorrhage (bleeding).

The disease can also be spread when dogs each fresh water snails found in coastal rivers and streams.

If you suspect that your dog was wandering near a stream or lake with wild fish, or if they ate garbage that may contain fish, tell your veterinarian if you see any of these symptoms. Signs of canine salmon poisoning occur within six days of eating infected fish. Symptoms are severe and include:

Your veterinarian will diagnose salmon poisoning in dogs by taking a stool sample or a they can use a needle to extract liquid from a lymph node. If the parasite's eggs are detected or even suspected, given the risk of this illness, treatment will start.

Treatment includes an anti-biotic and a dewormer to help with the parasite. If your dog is hydrated then intravenous fluid will be needed. Once treatment has started there should be an improvement within 2 days. Infected dogs can develop an immunity to protect against future problems.

To help boost the immune system and aid the liver as it removes any toxins, ask your veterinarian about providing your dog with an herbal supplement make for this purpose. such as Immunity and Liver Support.

Prevention starts with monitoring your dog when in a problem area. Keep garbage out of reach and never feed raw fish to your dog.

References for Salmon Poisoning in Dogs