Household Chemicals, Insecticides, Medications, and Foods That Are Toxic to Dogs

There are over 200,000 cases of dog poisoning a year. Common dog toxins found in the home include:

If you believe your dog has ingested a a substance that is poisonous to dogs, call a poison control hotline such as the one offered by the ASPCA right away (888) 426-4435 ($65 charge) or the Animal Poison Control Center (800) 548-2423. If you have the package for the product, check the label for instructions. Do not induce vomiting unless suggested by a veterinary or hotline professional. Act fast to avoid causing permanent harm. If you see your dog suffering from seizures, is fading or losing consciousness or is having breathing difficulties, bring your dog directly to an emergency veterinary clinic.  Chemical poisoning can be lethal, so always act on the side of caution and call a veterinarian immediately.

Common Household Chemicals Such As Rat Poison, Antifreeze and Mothballs (left to right) Are Toxic To Dogs

Chemicals that are toxic to dogs can cause mild to severe symptoms. Mild symptoms related to chemical exposure include:

See below for symptoms associated with specific chemicals that are toxic to dogs.

What To Do If Your Dog Eats a Poison

If you know what your dog ingested, check the label. Look for words such as danger or poison. Assume that product toxic to humans with also be toxic to dogs.

What the Chemical Label Words Mean: 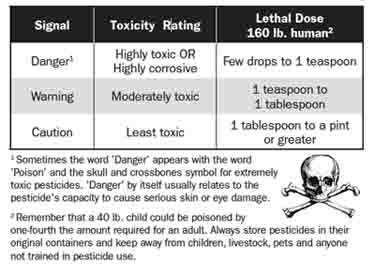 Pesticide product labels are a good place to start when determining how to avoid poisoning from products such as lawn insecticides. The REI (restricted entry interval) lists how long you should wait before a dog should be allowed on the lawn. This includes the removal of any dog toes or other items that come in contact with your pet prior to treating lawn or plant areas.

This poisoning can come from small amounts of alcoholic beverages like beer, vanilla extract, and raw bread dough.  Alcohol poisoning can cause bloat and intestinal rupture.

All parts of the avocado are very poisonous to dogs.  Avocado will destroy the heart muscle and lungs.

Chocolate cannot be metabolized by dogs.  It contains Theobromine which a chemical similar to caffeine.  Candy bars, M&M’s or just a small square of baker’s chocolate can be fatal to  dogs of any size.

It does not take many grapes or raisins to be fatal to most dogs.

Symptoms of this poisoning include; difficulty breathing, weakness, vomiting, jaundice and irregular heartbeat.

Xylitol is an artificial sweetener that is found in many cakes, cookies, sugarless candy and gum.

Symptoms of this poisoning are; fatigue, staggering, irregular heartbeat or breathing, seizures, coma and death.

General symptoms of pesticide poisoning are:

The insecticide Bendiocarb kills ants, crickets and fleas. Manufacturers are currently reducing or phasing it out. It causes excessive salvation, chest discomfort and muscle tremors. The insecticide Avermectin B1, used to kill fire ants, is toxic to dogs. Related symptoms are tremors and lethargy.

The insecticide Allethrin is used to kill mosquitoes and flies. It is toxic to dogs and has been associated with dog liver cancer.

Organophosphates when used in lawn insecticides can be dangerous to dogs and could cause tremors and seizures. According to the ASPCA, this represents approximately 20% of calls to their poison hot line.

A University of Colorado study indicated that higher levels of the insecticide 2,4 D were found in dogs that lived near treated lawns. A study published in 1995 in Environmental Research Journal shows a “statistically significant” increase in the risk of canine malignant lymphoma in dogs exposed to herbicides, particularly 2,4-D, commonly used on lawns and in “weed and feed” products.

Insecticides that use orthophosphates (Malation, dichlorvos) and those that use carbamates (Carbaryl, Aldicarb, Diazinon, Methiocarb) are shown to inhibit cholinesterase in a Harvard Study. This has been shown to cause aggressive behavior in dogs. A Purdue University studies demonstrated that gardens and lawns treated with pesticide have a higher incidence of transitional cell carcinoma of the bladder (bladder cancer).

The insecticide Rotenone can cause weight loss and vomiting.

For additional reading about dog poisoning and insecticides:

Insecticides that are Toxic to Dogs Pesticides are part of a routine pest management strategy for most pet owners. Animal safety on your property and the surrounding area should be integrated into any management decisions you make. Accidental animal poisonings can be prevented by following these guidelines.

Will Antifreeze Kill a Dog?

Ethylene glycol (antifreeze) is one of the most dangerous things your dog could ingest. Dogs are attracted to its sweet smell and taste. A tablespoon of antifreeze could kill (approximately 5) or it can cause severe symptoms in a small dog. Antifreeze dog poison treatment within hours of ingesting the poison includes induced vomiting to empty the stomach. Charcoal is giving to the dog to absorb antifreeze that is in the intestines. A medication is used which can prevent the dog's liver from converting the antifreeze into toxins that can harm the dog.  Similar steps are taken for white spirit or barbecue light fluid poisoning.

If dog kidney failure has already started, treatment is still possible with more aggressive approaches such as canine kidney dialysis. Dialysis can remove toxins which can give the dog's kidney an opportunity to repair themselves. A dog kidney transplant can also be used in chronic cases.

The prognosis for dogs treated within 12 hours after ingesting anti-freeze is good. The prognosis is grave after 24 hours.

Antifreeze dog poison problems can be avoided by picking up the poison from leaking cars and by storing the product in sealed containers. Better yet, buy a pet safe antifreeze made from propylene glycol such as the Sierra shown below. Antifreeze that contains propylene glycol such as the brand Sierra are not as harmful as antifreeze that doesn't contain this ingredient. While it will still make your dog sick such as stomach upset or problems with the nervous system, it shouldn't cause the kidney damage. Even with this brand, contact your veterinarian immediately.

Antifreeze dog poison problems can be avoided by picking up the poison from leaking cars and by storing the product in sealed containers. Better yet, buy a pet safe antifreeze made from propylene glycol such as the Sierra.

Cleaning products can cause burning in your dogs mouth, eyes, nose, stomach and skin. Dangerous products that are toxic to dogs include:

Like humans, lead poisoning is dangerous to dogs. Common causes include:

Symptoms of lead poisoning in dogs include vomiting, diarrhea, anemia (less than normal blood cells). Call your veterinarian who will administer a medication for removing lead from your dog's body.

Keep all medications in a safe place (both human and pet medications).  Never give your dog human medication without first asking your veterinarian.

Your Dog Ate Mothballs? What to Do.

Call your veterinarian and read the ingredients to him or her from the mothball box. Your veterinarian will induce vomiting, administer activated charcoal or intravenous fluids.

The list of poisonous plants is very long both indoors and out.  The most commonly found are

Symptoms of poisonous plant ingestion are;

See our guide to dog poisonous plants for more information.

The same thing that attracts rats to poison, the taste, is the what causes dogs to ingest rat poison. This type of poison, such as Warfarin can cause dangerous internal bleeding (called an anticoagulant rodenticide).  Ingredients and related brands that are toxic to dogs and that can cause canine rodenticide poisoning include:

Symptoms associated with a dog that eats rat poison include:

If your dog ate rat poison call your veterinarian immediately to avoid fatal internal bleeding. Do not wait for symptoms as it might be too late.

Poison made to kill slugs and snails is harmful to dogs.  Products contain the chemical metaldehyde, which tastes good to dogs. Many poisons contain sugar to attract the sails and slugs which also attracts dogs.

As little as 1 teaspoon can cause dog symptoms such as tremors, twitching and seizures. Other symptoms are:

If you suspect this problem call your veterinarian who will use charcoal to absorb the toxin and possibly induce vomiting.

Overdoses from flea and tick products can be toxic to dogs. If you apply too much of these products they could cause severe itching. There are several studies which support this conclusion:

Some dog flea control products use orthophosphates, which interfere with the nervous system. Look for ingredients such as Tetrachlorvinphos and Dichlorvos. (avoid these chemicals!!!) If you notice an unusual amount of itching then immediately bathe your dog with a mild canine shampoo lathering and rinsing multiple times. Call your veterinarian if you see seizures, excessive drooling or body tremors. Your veterinarian will provide activated charcoal to absorb any toxins and administer fluids if needed.

Call your poison control center immediately. Your veterinarian will treat your dog for chemical burns. Do not induce vomiting in case cleaning products are caustic.

Zinc poisoning is caused by eating objects toxic to dogs such as:

As little as ingesting 2 pennies can cause poisoning and even death so act fast! Symptoms associated with zinc poisoning in dogs include diarrhea, vomiting and anemia (reduced number of red blood cells), red or orange colored urine, lack of appetite. Treatment for zinc poisoning is to remove the eaten objects from your dogs digestive system.