"There are different types of canine mange, which is caused by varied mites. Symptoms range from mild to severe, and treatment varies with the type and severity of the mange affecting your dog. Treatment may include prescription or over-the-counter dog mange remedies."

There are several approaches for mange mite treatment and for addressing the related symptoms of the infection. There are also several dog health issues that can cause similar symptoms - see this chart to learn more about these. 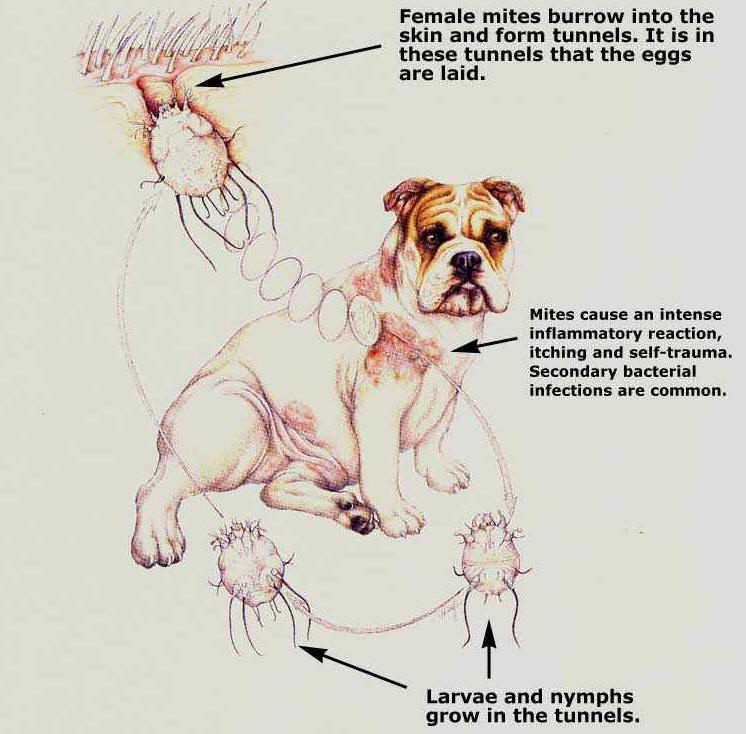 A Mite's lifecycle is interrupted during the treatment process of mange mites. The lifecycle of demodectic mange mites (Demodex gatoi) is completed in 18 to 24 days.

Sarcoptic Mange symptoms start in areas on the mid-section of the body and the spreads to the ears, areas around the eyes, legs and elbows. Sarcoptic mange causes severe itching, which causes the dog to scratch. The scratching introducing bacteria, causing skin lesions and infection. Eventually the skin starts to wrinkle become thicker. If left untreated the condition spreads to the entire body (called generalized dermatitis).

Since the disease is difficult to treat, a veterinarian will prescribe or recommend one or several treatment methods:

Prescription Remedy: A veterinarian can prescribe Ivermectin for 14 days using 3 to 4 treatments. Note that some breeds such as Collies should not be given Ivermectin due to sensitivity. Mibemycin oxime is another oral medication given for 1 or more weeks.

When treating Sarcoptic Mange you should wear gloves since the mites can cause problems for humans for several days, after which they cannot survive.

For additional support consider adding a homeopathic formulated to speed skin and coat healing such as Skin and Coat Tonic.

Demodectic Mange (also called red mange and demodex) can result in "coin" shaped spots on the body (usually up to 5), usually on the face around the eyes or nose. Itch isn't as much of a problem as it is for sarcoptic mange.

Frequently seen in dogs age 3 months to 1 year, or in dogs with a disease that depresses the immune system, the mite population starts to grow causing mange all over the dog's body.

For generalized mange where it is all over the body, you can try an over the counter dip such as Naturasil.

Treatment can take several months. An alternative treatment for demodectic mange in dogs is increasing the number of prescription dip treatments, the oral medication Milbemycin oxime for 2 to 3 months or oral Ivermectin for 2 to 3 months.