"Symptoms of dog mange, which is caused by mites, can vary depending on the type of mange.

The two most common types of canine mange are sarcoptes (also called sarcoptic or scabies) and demodicosis (also called demodex or demodectic).

There are also conditions that have an appearance that is similar to mange, but actually have another cause.

Before deciding that a condition is caused by mange, do a quick scan of the table below to ensure that other possible causes have been considered and eliminated. Also, when mange is suspected, most Vets will treat for for the disease and confirm the diagnosis if your dog starts to improve.

Symptoms and Causes of Canine Skin Conditions by Body Location

How to Differentiate Between The Two Primary Types of Mange

Canine demodicosis is caused by a mite that is buried at the base of a hair follicle. A pustule or papule will form around the hair, a condition referred to as a follicular papule or pustules (pustules are pimples that are filled with pus).

There are several forms of Demodectic Mange:

Affected areas are shaped like a coin. The center of the coin has hair loss (alopecia). The skin will look like it is scaling and red in color (called erythema). There are usually up to 5 areas that are affected. These are usually found on the hind legs, abdomen, front legs and face. Areas of the face most likely to be affected are the area where the top and bottom of the mouth come together, and around the eye.

This type of mange usually does not itch. Most cases of demodectic mange will heal on its own. 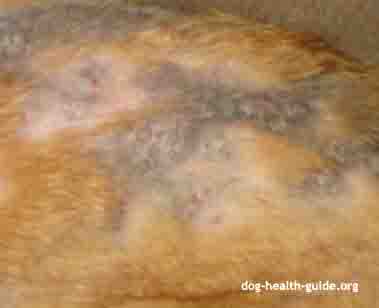 Mange on the back of a dog. Note the darkened skin areas and hair loss that characterize generalized Demodex.
Source: Julie Knicely

Generalized refers to mange which occurs all over the body. Symptoms include hair loss, skin scaling, red irritated skin areas and mild itch occurs. Symptoms are more severe in dogs with a compromised immune system. In chronic some skin areas will suffer from hyperpigmentation (darkening of the skin) and thickening (lichenification).

Hair loss may not be severe in dogs with long hair or in certain breeds (Minaature Poodle, Lhasa Apso, Shih Tzu and Maltese).

This refers to mange located near the paws. Symptoms of paw mange include red skin and bacterial infection with oozing. As the condition progresses it can cause lameness and pain. Bacteria under the skin can cause more inflammation and cellulitis. Swelling can occur on the skin surface as well as crusting and scaling (seborrhea). Skin oozing or pus, pain, lymph node disease (lymphadenopathy) are also seen. A dog may act depressed.

Dog scabies are non-follicular papules. It causes intense itching that results in a dog rubbing and scratching the skin. All of this rubbing results in skin sores, crusts and bacterial infection. As the infection spreads it causes the dog skin to become wrinkled and thick. Hair loss is extensive. Sarcoptic dog mange symptoms start on the chest and abdomen. The disorder also can affect the ears, areas around the eyes, the legs and elbow. Left untreated the condition can spread all over the dog's body. 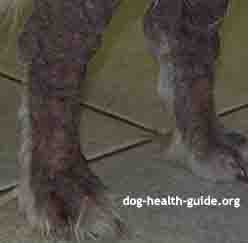 Sarcoptic Mange Symptoms Cause A Thickening and Wrinkling of the Skin

Dog ear mites leave behind debris which looks like coffee grounds. The presence of mites in the ear causes irritation and skin inflammation. As the infection becomes more chronic, there can be a waxy buildup in the ears. Dogs with dog ear mites will continually scratch the ears and shake their heads. The condition causes severe itch. 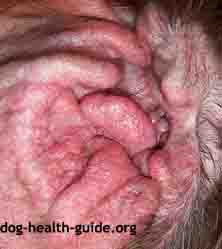 References for Symptoms of Mange in Dogs

Demodicosis: what we know in both the dog & cat
Dr. Peter J. Ihrke