The common dog stomach ache is the result of anything that can disrupt the normal emptying of the gastrointestinal system. Multiple problems can result including constipation and distension of the abdomen. Related symptoms include vomiting, nausea and appetite loss. Simple causes include over eating, foreign objects, poisons, allergies, motion sickness and parasites. In puppies, an immature disgestive system could be the cause.

In most dogs, problems will resolve on their own in under 24 hours. If problems last, or if you see signs and symptoms that are unusual for your dog such as changes in posture, vomiting more than 2 to 3 times, blood in the vomit, diarrhea or stool, or pain, then see a veterinarian. Do not ignore the problem since what can be treated early can work to avoid bigger problems down the road."

A dog's stomach is divided into two areas. 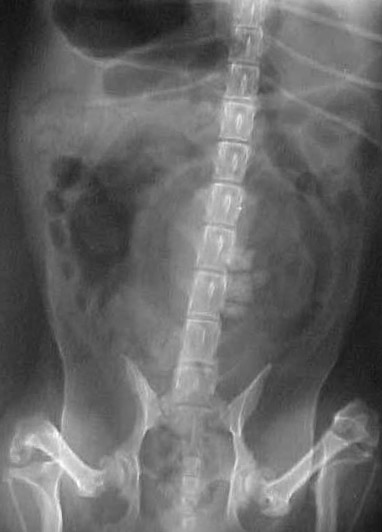 There are many possible causes for a dog stomach ache. These include: 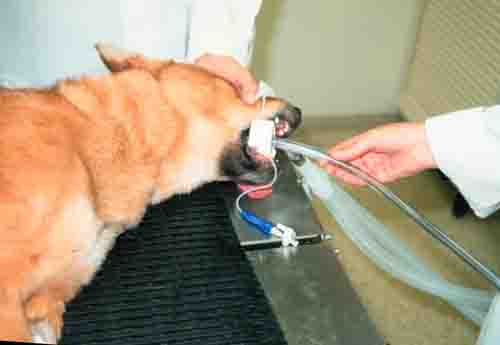 The major symptom associated with dog stomach ache is vomiting, which can occur any time after eating. A dog's stomach will be empty approxaimately 6 to 8 hours after eating. If a dog vomits undigested food 12 hours or more after eating, that indicates some type of stomach disorder or an obstruction that is preventing food from moving through the gastrointestinal system.

Other symptoms associated with dog stomach problems include:

Foreign debris removed from A Dog's Stomach. Patient Did Not Show Any Symptoms. Dogs that Eat Objects Such as Balls and Grass Tend to Be Repeat Offenders and Need to Be Watched Carefully. 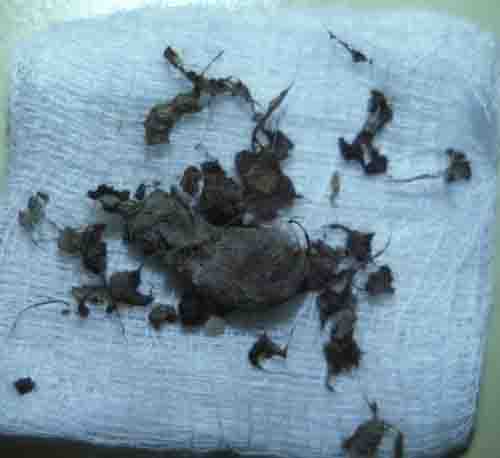 A veterinarian will review common and less common causes of vomiting. Any emergency health issues such as obstructions or bloat will need to be quickly ruled out as a possible cause.

Tests include CBC blood tests and urinalysis. The veterinarian will also check for electrolyte imbalances and dehydration. A fecal flotation test is used to test for gastric hypomotility (ability to make normal bowel movements).

If the stomach is distended, then X-rays will indicate any gas or fluid buildup. If there is normal emptying of liquids, but not solids, then a liquid barium contrast study is needed. One new diagnostic tool is a smartpill which is swallowed by the dog, and then transmits data on time and temperature throughout the gastrointestinal system.

An endoscopy can detect any food that should not be in the stomach and obstructions.  It is used when the caused cannot be determined using other easier to adminster tests.

Dog Suffering from Stomach Ache Caused by Porcupine Quills. Example of Foreign Objects That Can Cause Stomach Problems. 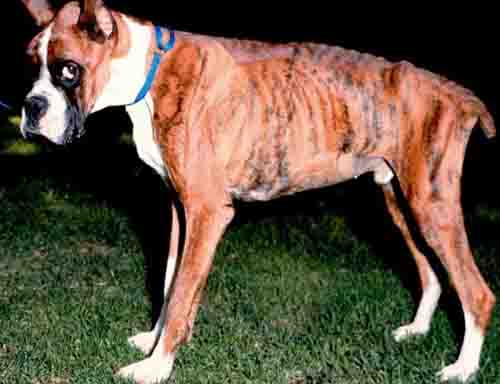 If dog stomach ache symptoms continue and are not getting better after 24 hours, then visit a veterinarian.

Most dogs are treated at home after being checked by the veterinarian. If any vomiting is severe, a dog may need to be hydrated and have electrolyte balances restored in the Vet's office.  The diet may be changes to one that is low fat and low fiber, or that has more of a liquid consistency. Meals are reduced in size, but offered more times during the day.

Also remember to look for signs of GDV (bloat). If you see them seek emergency medical treatment. These include:

Most dogs will feel better after some minor changes in diet are implemented.

Have A Question For Our Vet About A Dog Stomach Problem?

Do you have a question for our veterinarian about a dog stomach problem? Share it and we will answer it for free!

Please include your dog's age, breed, medical history and if possible, a picture of the condition.