How To Treat A Dog Vomiting Blood

"Hematemesis, which is commonly referred to as a dog vomiting blood, is either caused by something temporary such as the ingestion of an object your dog ate after being outside, causes such as dietary intolerance, or something systemically wrong such as with the digestive tract (GI), liver or kidneys. It can also indicate bleeding that originated in the mouth or respiratory system.

Blood can appear as flecks, a blood clot, or digested blood, which has the appearance of coffee grounds. In rare cases blood in vomit can indicate a life threatening condition, so be sure to consult a veterinarian. Keep track of and describe the severity, frequency and progression of the problem. Treatment involves ensuring that your dog is not dehydrated and then removing the underlying cause." 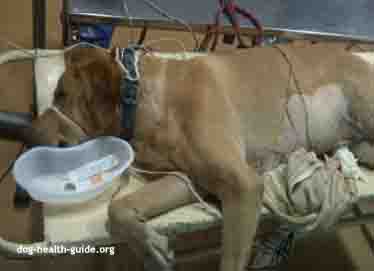 A dog vomiting blood (called hematemesis) can be due to something temporary or something systemic (a problem with your dog's gastrointestinal system). Problems range from a few drops of bright red blood in his vomit, or the vomit may appear very dark and resemble coffee grounds caused by digested blood.

When observing your dog vomit write down the answers to as many of these questions as possible in order to help your veterinarians reach a diagnosis:

The most common causes of vomiting are listed below. These will be ruled out before a veterinarian looks for other causes:

If vomiting is more severe or chronic, and the above list is ruled out, then your veterinarian will consider the following conditions:

Dogs vomit a variety of things and ways. It may be undigested dog food or partially digested, unidentifiable matter. It may be mostly liquid. It may have various colors. Take note of what the vomit looks like and if there are any other symptoms such as diarrhea. If you take your dog to the vet, he or she will want to know that information.

What To Do If A Dog Vomits Blood

An exception is if your dog appears to be vomiting a mix of dog vomit and blood, then see a vet. The cause is either temporary, such as if your dog ate something he or she shouldn't, causing irritation to the gastrointestinal tract or it could be systemic where there is a problem with the gastrointestinal tract that requires a thorough examination.

There are two easy ways to check for dog dehydration:

If you aren't sure, or suspect that your dog is dehydrated, immediate veterinarian attention is needed. Dog can go days not eating, the same isn't true for water - they need to always stay hydrated.

Symptoms That Call For a Trip to The Veterinarian

There are several signs and symptoms that indicating that an underlying disease is causing the canine vomiting problem.  These symptoms include:

If your dog is suffering from a gastrointestinal disease or a partial blockage of the gastrointestinal system, the vomiting of partially digested food happens within 8 - 10 hours after eating. Vomiting can be accompanied by other symptoms such as:

If you have a dog vomiting blood, take a sample of the vomit with you to the veterinarian for examination.

Your vet will perform a thorough physical exam, do a blood test, and other tests as needed. The goal is to quickly determine if the severity of the problem and to determine if the problem is regurgitation (signs are clear liquid or undigested food) or vomiting (characterized by gagging and retching).

The vet may do x-rays and an ultrasound. A gastroduodenoscopy, a test where the vet can look at your dog’s stomach, may be performed. In some cases, a biopsy or ultrasound may be necessary.

Your veterinarian will go through the following steps:

Other conditions where blood tends to be present include:

If a dog is chronically ill the patient may require inpatient treatment.

If your dog has had severe vomiting, the patient may need to be stabilized with subcutaneous (under the skin) fluids for dehydration (intravenous) fluid. He should also have a bland diet until the vomiting stops. Your veterinarian may recommend that your dog stay at veterinary clinic for several days.

If your dog swallows a foreign object such as a sharp edged bone he or she picked up when outside of the home, your veterinarian will use a laxative to try and pass the bone particles and possibly an anti-biotic to reduce the change of infection. Intravenous fluids and a stay at the veterinary hospital for a few days are a possibility.

If the dog vomiting blood condition condition continues for more than 5 to 7 days after treatment begins, and if bleeding in uncontrolled, or if an ulcer tears or perforates, surgery might be required to stop the bleeding.

Medications such as histamines can inhibit gastric acid secretion. Antacids can neutralize gastric acid when given 4x to 6x per day. Antibiotics are prescribe to treat any bacterial infections. Antiemetics (anti-nausea drugs) can help to stop vomiting.

Depending on the cause, lab tests can monitor progress.

Conditions with Guarded to Poor Prognosis:

Conditions with Good to Excellent Prognosis: