There are several puppy skin conditions that require attention by a veterinarian. Most issues can be resolved through treatment or by improving the pup's nutrition with supplements. In most cases, the Vet can quickly identify and correct puppy skin disease. If the disease does not respond to treatment, then advanced testing is needed to determine the underlying cause.

In puppies, a good deal of the protein they consume is directed toward the coat and skin. If the pup doesn't receive adequate nutrition, then the coat in particular will take on a dull color and appear to be dry. Important food components include fatty acids (linoleic acid contributes to the skin as a barrier to infection and disease) and zinc are particularly important. Cheaper dog foods that are not AAFCO certified often are the cause of puppy skin disease due to insufficient levels of zinc.

There are several causes of puppy pimples and skin conditions. These include:

To treat the condition, a puppy should be kept in a clean dry space.  Infected areas should be treated with drops of Betadine (povidone-iodine) or chlorhexidine. Skin should be washed 2x per day. 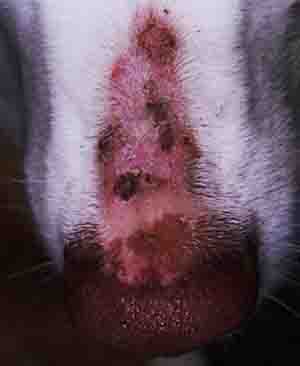 Weimaraner Puppy with Puppy Pimples cause by Pyoderma, Strangles and Pustules 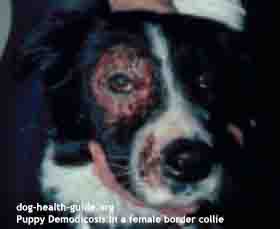 Demodicosis in puppies can cause skin ulcer, puppy pimples and crusting as seen in this 8 month old Border Collie. 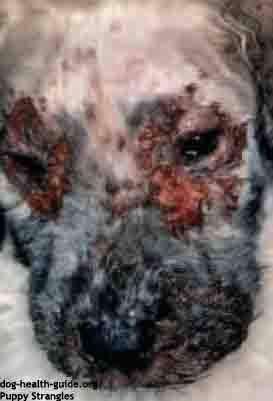 Puppy strangles can cause swelling of the face, hair loss and skin crusting 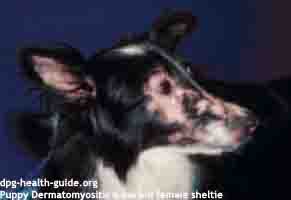 Pimples and lesions on puppy face caused by Dermatomyositis